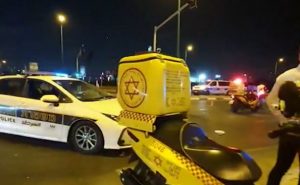 Tragedy struck on Monday in Petah Tikva, Israel when a 13-year-old boy was killed after he was struck by a car while riding an electric scooter.

Medical crews brought the boy, a resident of Ramat Gan, in critical condition to Beilinson Hospital in Petah Tikva, where he was pronounced dead, reports Times of Israel.

Shortly before the boy’s accident, a 46-year-old man was listed in mild condition, after he was injured by a car while riding a scooter in Beersheba. He was treated at Soroka Medical Center in Beersheba.

“The boy was lying on the side of the road next to the sidewalk, unconscious and suffering from severe injuries to multiple organs,” said Magen David Adom paramedic Elad Folk. “We immediately started medical treatment, put him in an ambulance unit, and escorted him to the hospital. Along the way, we had to perform CPR when his condition became critical.”

Initial reports of the accident showed the boy was hit after he crossed a pedestrian crossing that had a red light, and was struck by cars crossing through the intersection on a green light.

Saxon is a prolific writer with passion for the unusual. I believe the bizarre world is always exciting so keeping you up to date with such stories is my pleasure
Previous Jewish scholar charged with raping seven female followers ‘after convincing them he had special powers that could mend their impurities’
Next Man accused of murdering Atlanta rapper Trouble surrenders to police (Photos)