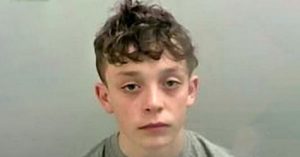 A 14 year old boy has been banned from a town after launching a campaign of misery, and threats towards the town’s residents.

Keylan Evans, displayed anti-social and threatening behaviour, as well as online abuse in the Worcestershire town of Kidderminster, UK according to West Mercia Police.

Local reports from Kidderminster have it that the police were forced to take action following a string of complaints from local businesses and the community who fell prey to the teen’s dubious ways.

Worcester Magistrates’ Court slapped him with a Criminal Behaviour Order (CBO) for ‘causing a significant amount of distress and harassment to local businesses, members of the public and the wider community’.

The court designation means Evans, from Stourport-on-Severn, will be forbidden from entering the town until May 2025.

By this ban, Evans is prevented from entering Kidderminster, except to attend court, a police station or see his solicitor, and associate with certain people.

He is also banned from being in a group of more than three people in public, outside his immediate family.

Restrictions were also placed on his behaviour and communications.

Evans could face a fine or a prison sentence if he were to breach the order.

Sergeant Daniel Townsend said: ‘This order will hopefully prevent him from acting in this manner in the future.

‘I hope the CBO provides reassurance to the local community that the police will take positive action in these situations.’

READ ALSO: Mum Rips Off Son’s Penis, Beheads Him Because He Looks Like His Dad

Saxon is a prolific writer with passion for the unusual. I believe the bizarre world is always exciting so keeping you up to date with such stories is my pleasure
Previous Indian man chops off wife’s hand to prevent her from taking government nursing job
Next Terrifying video: Raging bull tackles mountain cyclist in California