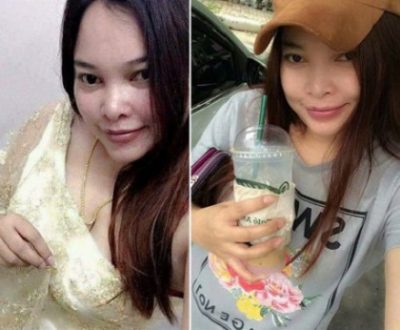 What a strange story. This woman’s job is to marry men and run away with the bride price. Well, the police are after her currently to recover the loot she has been carting away from innocent men.

The Police in Thailand are on a manhunt for a 32-year-old Jariyaporn “Nammon” Buayai who married at least twelve men over the past
six years and fled with the dowry cash each time.

The woman allegedly cheated him of a THB200,000 dowry four days after their
wedding at a seaside resort in Prachuap Khiri Khan province.

After a post that went viral on social media which warned
Thai men to look out for the dowry scammer and marriage con artist, Prasarn,
who is now remarried, came forward to the police after finding out his past
marriage was a lie.

During their relationship, Prasarn said that Nammon refused
to let him meet her parents. Only four days after their wedding, Nammon told
him that she had to deal with their fruit business in Nong Khai province and
left.

That was how she disappeared. Soon after, Prasarn could no longer contact her. Instead, he
received a call from a woman who claimed to be Nammon’s niece. She told him
that Nammon lost the baby and Prasarn should not contact her again.

Prasarn only realized he had been duped when Nammon’s story
was posted on social media recently.

Meanwhile, another man, who declined to be named, told
Laid-off told that he also met Nammon on Facebook and was allegedly cheated of
THB500,000 in dowry in February of this year. After he transferred the money to
her bank account, Nammon simply said it wasn’t a good time for her to be
married because of a “bad horoscope.”

Citing another victim, only identified as “Wichit,” Morning
News reported that this groom has been in touch with seven other men who were
duped by this woman.

Wichit said their stories are similar. Nammon added all of
them on Facebook, had sex with them right away after their meet-up, and lied
about being pregnant.

Saxon is a prolific writer with passion for the unusual. I believe the bizarre world is always exciting so keeping you up to date with such stories is my pleasure
Previous Hilarious Photos of Africans Learning How To Climb Buildings After Migrant Rescued Dangling Boy
Next Meet The King With 100 Wives, 72 of Whom Used to Be Married to His Father