Man Disappears From Police Station After Touching His Private Part 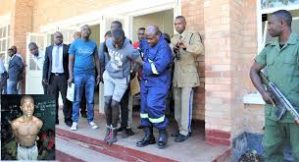 A thief in Zambia noted for using home-made charms for protection has allegedly disappeared from police custody after touching his private part.

The incident which happened on Thursday, May 31, at Chingola Cetral Police State, Chingola, Zambia, shocked the officer who had initially chained the thief’s hands behind him but had to unchain him because he was to appear in court on that day.

Reports have it that a police officer at the said police station informed Zambian Watch that a suspect by the name of Victor Phiri who was arrested for committing various crimes has mysteriously disappeared from police’ hands.

According to sources, the suspect was well known for using some kind of charms of mysteriously disappearing in thin air and this was why police chained his hands and legs to prevent him from touching his private parts where it is believed his charms are.

But as he was going to appear before court yesterday, it was ordered that his hands and legs be unchained hence he found a chance of touching his privates and disappeared afterwards, according to Zambian Observer.

Sources say the police are keeping the matter secret while making efforts find and rearrest the thief.

Saxon is a prolific writer with passion for the unusual. I believe the bizarre world is always exciting so keeping you up to date with such stories is my pleasure
Previous Minister Bans Doggy Style, Says It Could Lead To Cancer
Next Uganda Introduces Facebook and WhatsApp Tax To Stop Gossip