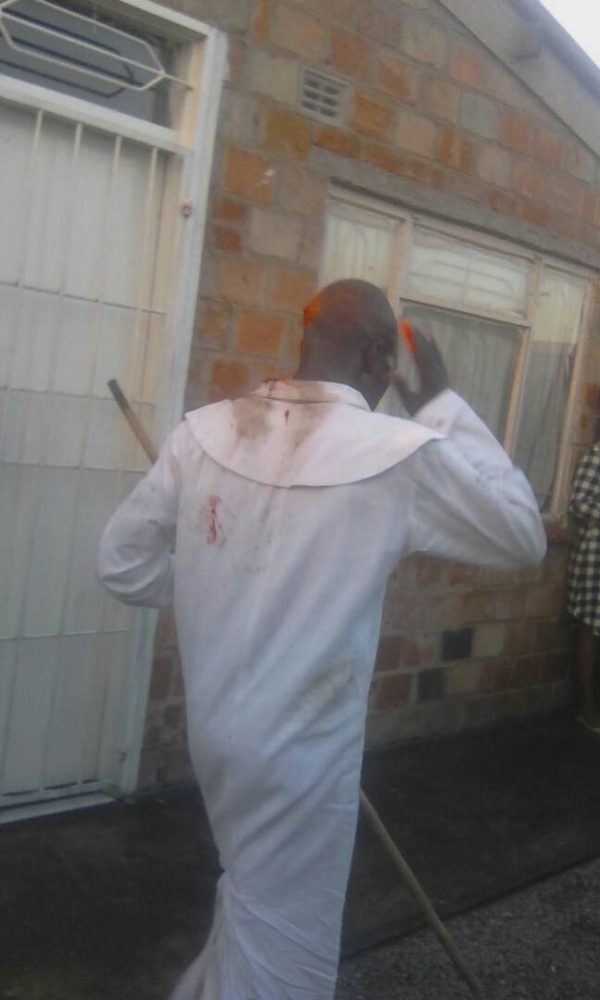 A prophet in Bulawayo, Zimbabwe, has taken to his heels after his body was almost covered in his own blood following a 5-hour battle with a evil creature he was invited to exorcise.

Drama started last Monday evening when Residents of Cowdray Park, a high density suburb of Bulawayo, Zimbabwe, were taken through an intriguing five hours of drama as the prophet went through a bloody battle with a creature presumed to be goblin he attempted to exorcise.

The prophet known as Tsikamutanda is a popular witch hunter in Bulawayo.

He was invited by the residents to “remove” the suspected goblin from a house belonging to a man whom residents identified as a Mr. Gumbo after they had been exposed to over two weeks of horrific attacks from the goblin.

But things did not work out the way the prophet had planned as he got to the scene and on sighting him, evil creature emerged from the building and started pelting stones on the prophet. The stones broke his head as blood covered his body.

The residents had claimed that the evil creature was attacking them with stones and causing unrest in the community as a result of which they invited the prophet.

“We could no longer stand the attacks by the goblin and so decided to contribute money as residents and invited the witch hunting prophet known as Tsikamutanda to exorcise the goblin,” said a resident who spoke to ZimEye.com correspondents.

“The prophet identified Mr Gumbo’s to be housing the strange creature but Gumbo initially denied having the thing in his house,” said the resident.

However, after applying his magic charm the goblin is reported to have emerged from Gumbo’s house leading to a protracted battle with the prophet.

The prophet was pelted with stones on the head and all over his body by the invisible creature leaving him bleeding badly.

The prophet conceded an initial defeat and fled the house after Gumbo had also joined his goblin and chased the prophet out of the house in rage, ZimEye.com reports.

Saxon is a prolific writer with passion for the unusual. I believe the bizarre world is always exciting so keeping you up to date with such stories is my pleasure
Previous Tech! Chinese School Uses Facial Expression To Monitor Students’ Attention In Class
Next Man Helps Wife Get Married To Her Boyfriend