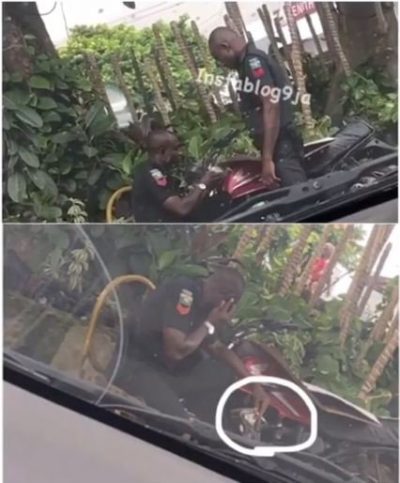 Lagos State Police Command has arrested two officers spotted gambling and smoking while on duty at what looks like a checkpoint.

Photos of the two officers engaged in the act went viral online leading the state police command to embark on investigations after which the officers involved were identified and arrested.

The State Police Public Relations Officer, Chike Oti, in a statement, said that contrary to online reports that the two officers were counting bribes, investigations revealed they were actually counting coupons they collected from a game of gambling they played.

The PPRO described the act as an embarrassing distraction and urged the public to always expose undisciplined and unprofessional police men.

The two men are currently undergoing trial which, according to the PPRO, could lead to reduction in rank or dismissal.

Saxon is a prolific writer with passion for the unusual. I believe the bizarre world is always exciting so keeping you up to date with such stories is my pleasure
Previous Shark Bites Off Man’s Manhood While While Swimming At Beach
Next Man Drags Neighbour To Court Over Noisy Grinding Machine