Shark Bites Off Man’s Manhood While While Swimming At Beach 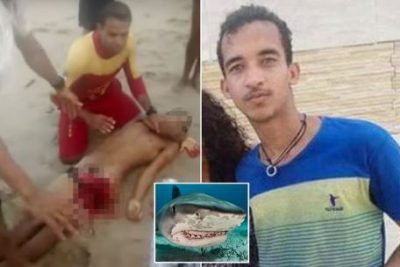 Tragedy struck in Brazil over the weekend after a young man had his p3nis ripped off by a shark while he was swimming in a beach.

The young man is currently in critical condition after his manhood and parts of his leg were ripped off by the shark.

The 18-year-old man, Jose Ernestor da Silva, was attacked while bathing in waters off the Piedade beach near Recife, on Brazil’s northeast coast. 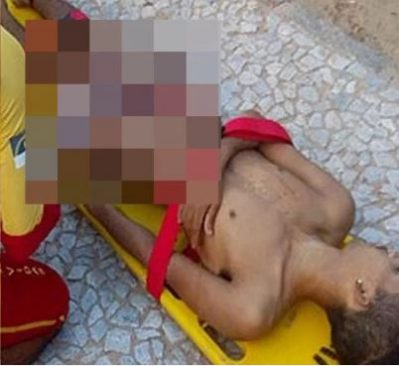 He was swimming with his brother and friends in deep water near to the shore despite the area being marked by signs warning of shark attacks.

According to local media, he was attacked just as lifeguards told the group to come closer in to the shore.

Witnesses recorded the moment Jose was pulled from the ocean and people could be heard screaming as other beachgoers attempt to stem the blood and patch up his injuries before emergency crews arrived.

Others can be reportedly be heard telling Jose to ‘breathe’.

According to Metro UK, the injured teenager was rushed to hospital, where he is understood to have suffered two heart attacks and is in a critical condition. He underwent emergency surgery after the bite, believed to be from a tiger shark, according to medics.

Ambulance medic Wagner Monteiro said Jose had one heart attack after arriving at the local Aeronautica Hospital and another as he was being transported to the Restauracao Hospital in the centre of Recife.

He said: ‘The shark bite amputated his femur and his penis. He lost a lot of blood and is in a critical condition.’

Jose’s mother Elisangela dos Anjos, 42, told Brazil’s JC Online website that he had gone to the beach without her knowing. She found out about the attack from his brother Ezequiel, who was with him, who called her from the beach.

Speaking from the hospital, she said: ‘He would go in secret, because he knew that I thought it was dangerous. ‘I wasn’t worried because I thought he was somewhere around the house.

‘When I heard about it I went crazy, all the neighbours heard me screaming.’

Saxon is a prolific writer with passion for the unusual. I believe the bizarre world is always exciting so keeping you up to date with such stories is my pleasure
Previous Tunisia Goalkeeper ‘Fakes’ Injury During World Cup Warm-Up So Team-Mates Can Break Ramadan Fast
Next Policemen Gambling On Duty Arrested In Lagos