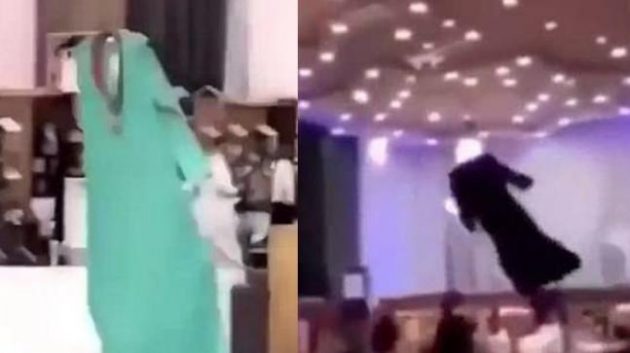 Please watch this video but don’t try to laugh.

Organizers of a fashion show in Jiddah, Saudi Arabia have caused a stir after using unmanned drones to display dress designs because female models were not allowed.

Clothes paraded by unmanned drones were floating across the runway in the most bizarre fashion.

The innovative attempt to replace female models brought up mixed reactions from social media audience some whom slammed the idea because according to them, it reflected the extreme conservative nature of Saudi Arabia against women. But some others simply thought the idea was weird as the floating clothes looked like they were being paraded by ghosts.

This was definitely not the reaction the organizers expected.

The dresses were displayed using unmanned drones and the idea was to make the show “unique” for buyers but it seemed to have backfired.

The dresses swirled around the room as they flew through mid-air, suspended from unmanned drones and people felt they looked like flying ghosts.

Watch this video which was posted online by someone present at the event.

One of the Persons who posted this online wrote the comment below:

“I’m dying at this fashion show in Saudi

Saxon is a prolific writer with passion for the unusual. I believe the bizarre world is always exciting so keeping you up to date with such stories is my pleasure
Previous Man Dies While Trying To Take ‘Selfie’ With Lightening
Next This ‘Fake’ Pilot Has Been Flying Passenger Planes For Over 10 Years Without Attending Aviation University