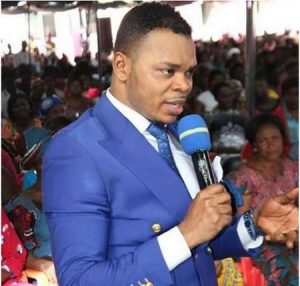 There is no way you should miss this video.

High-profile but controversial Ghanaian Pastor, Bishop Daniel Obinim, has set the internet buzzing after his acrobatic celebration as he found out that a church member won N230 Billion from Lotto number he gave to the member. 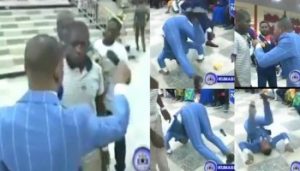 Obinim who is the General Overseer of International God’s Way Church, Ghana, immediately place his head on the floor and started somersaulting after the member announced the amount he won.

The pastor is known for giving his church members ‘anointed’ Lotto numbers, sometimes through spiritual real as he goes into their dreams to hand over the numbers to them. This is despite the skepticism and criticism by  some other christian denominations against playing the Lotto game.

When the young announced that he won played the game and surprisingly won himself 3 billion Cedis which is N230,325,075,600 when converted to Nigerian currency, the pastor could not believe his ears. He screamed the amount and took to the floor for the strange display.

Vanko is a cheerful writer whose enthusiasm for unusual stories is inspiring.
Previous Three Infants Die In Indian Hospital While Sharing One Oxygen Cylinder
Next Trending! University Students Read In Unusual Ways To Get Unusual Results