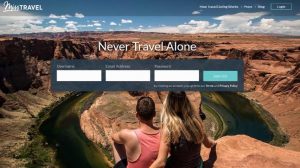 This may sound strange but it is really getting a lot of traffic from users.

A controversial App called “Miss Travel” offers opportunity for users to travel round and see the world for free but they would have to offer sex for free to whoever is their companion in the trip.

The App which primarily targets younger girls and men is often used by older men and women looking for younger sex partners. The older men pay for the trip, the younger partners get on board for free but they will most certainly offer free sex to their companion who is paying for the free trip. While the younger person sees the world for free, the older companion who pays for the trip gets sex in return.

Strange way to encourage prostitution you may say but this App which is popular online is seen as a dating App.

The Miss Travel app, which is also available as a service on a website, is getting popular because it apparently allows people to travel the world for “free”. Note that it is not entirely free because you offer sex in return.

This App allows rich people — likely to be mostly men — to sponsor trips of other people, in return for companionship and — again not said so explicitly but implied — sex.

The dating app promotes itself as a “leading online dating site” but is basically a way to get free trips in lieu of free sex.

The creator of this App, Brandon Wayde who is a graduate of MIT, also has another website called WhatsYourPrice.com, a dating site where members bid for dates in an online auction environment. He has hosted several “Sugar Daddy events” to promote his websites in past.

The Miss Travel, the dating website seems like a surrogate site for escort services. Members of Miss Travel are mostly older men who are looking for young girls as travel mate and who have the money to sponsor their travel trips. It’s just that the girls — or for that matter guys — who accompany the person sponsoring them aren’t paid in cash. Instead they have to travel to all the cool destinations with the person and share the hotel rooms.

According to Wayde, the website which was launched in 2012 has over 615,470 members using the platform. The registration for the website is free of cost and female members enjoy a privilege over male members of making free calls to members on the site. Male members need to take premium membership to contact other female members or what it like to call as “MissTravellers.” Users should be 18 or above and must upload their photos during the registration to complete the process.

This site is generating so much controversy. It has been criticised on numerous grounds like it has mostly married members. The website also says that escorts are not allowed to use the app but then in a way it is an escort service masquerading as a dating site.

Some may even misinterpret the site as a channel through which a sex slave gang is accomplishing their task.

Vanko is a cheerful writer whose enthusiasm for unusual stories is inspiring.
Previous Nigerian Man Buries Father In Brand New BMW Worth N32Million
Next See Indian School Where Students Score More Than The Total