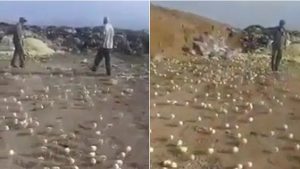 A landfill in Georgia is currently overrun by hundreds of tiny yellow chicks which were abandoned it eggs that were presumed to be spoiled. After the eggs were dumped in the landfill the chicks began to hatch to fill the area with moving yellowish creatures.

The incident took place in the small city of Marneuli, in Georgia. The turned into a chick hatchery , after the scorching heat caused hundreds of spoiled eggs disposed by a local poultry farm to hatch.

The incident was captured in a video posted on Sunday by a Facebook user Sahid Bayramov. The video shows the landfill crawling with cute yellowish chicks chirping continuously and looking for their mother. Also visible in the video is a large pile of eggs which which is presumably where all the tiny birds came from.  This video immediately went viral before it was picked and projected the more by local and international media.

It was reported that residents of the city are picking some of the chicks and taking them home.

Vanko is a cheerful writer whose enthusiasm for unusual stories is inspiring.
Previous Police Officer Mistakenly Shoot’s Colleague’s Thigh While Chasing Suspect
Next Man Reveals Why He Buried His Father In Brand New BMW