Man Reveals Why He Buried His Father In Brand New BMW 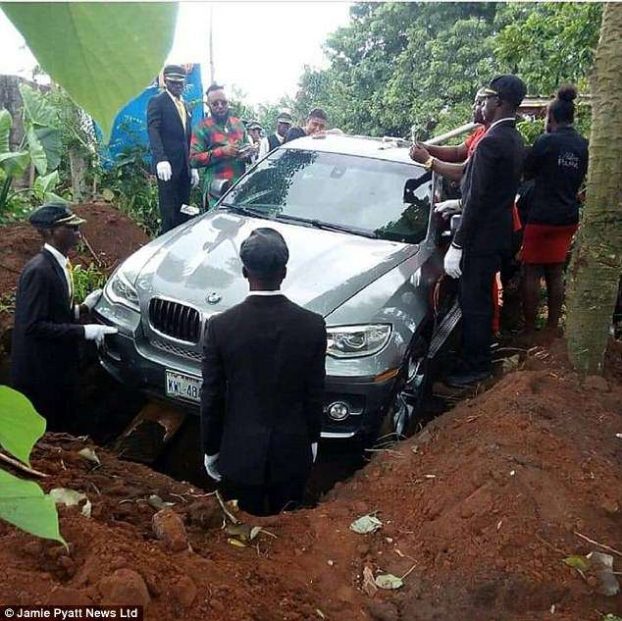 A Nigerian man who recently buzzed the internet for burying his father in a brand new BMW has explained why he did so.

Contrary to insinuations that the incident was just a scene in an up-coming movie, it happened that the burial took place live and was widely reported by local and international media including Fox news and Daily Mail UK. It was no movie at all.

The wealthy man, Azubuike, had angered many online users who felt it was madness and a waste of money.

But he explained that he had always promised his father a flashy car but before he could fulfill that promise the man died. So he decided to go ahead and fulfill it for his dad posthumously.

After his father died recently due to old age in the remote village of Ihiala, Nigeria, Azubuike bought a brand new car worth $66,000 from a showroom to bury his father and fulfill his promise.

The burial reportedly took place over the weekend in Anambra State, where the late father was allegedly residing.

A picture of the burial caused a stir on social media and was shared more than 22,000 times. The photo taken at the funeral shows a huge grave dug six feet deep and a BMW being lowered into it.

Azubuike’s action made many people on Facebook furious with him man for making a mockery of his father while others were angered at the waste of money and stated he could have used it for the development of the village, reports Daily Mail Uk.

“Buy the car for your parent while he is still alive if you are moneyed and bury them with a decent coffin but this is just being foolish and showing off,” Sifiso Inno Makhashila, a Facebook user, said.

“Insanity and selfishness regardless of that fact that is your cash,” another Facebook user, Calvin Cal Diamean, said.

Another user, Obienice Mohale, wrote on his Facebook page, “This is the sort of thing that keeps us poor as black people.”

Saxon is a prolific writer with passion for the unusual. I believe the bizarre world is always exciting so keeping you up to date with such stories is my pleasure
Previous Georgian Landfill Overrun By Hundreds of Chicks After “Spoiled” Eggs Hatch (Video)
Next Reverend Father Seen Praying For Masquerade