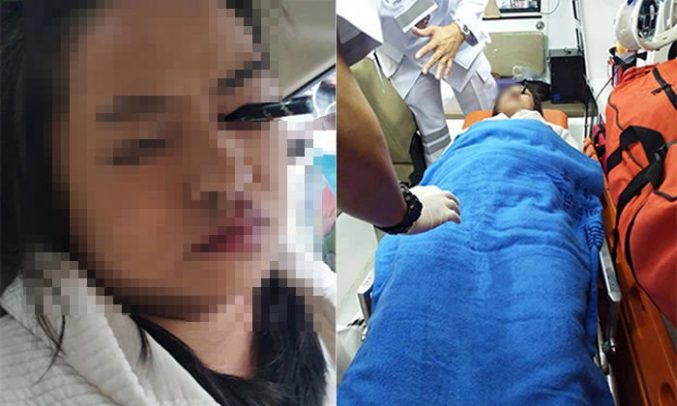 Doing your makeup in a taxi may save you sometime but is it really worth the risk? A Bangkok woman has learnt this the hard and most terrible way. Here is what happened.

A Bangkok woman had a piercing wound to her left eye after the taxi which she was riding in crashed into the back of a slow moving truck.

The car crash was described as a minor accident but the woman was making up with eyeliner pencil in the back seat of the taxi and as the crash happened, the eyeliner pencil went straight into her left eye and got stuck there.

When emergency service rescuers in Bangkok, Thailand got to the scene, the y saw the woman in the back seat of the taxi already in so much pain with the pencil stuck in her left eye.

According to rescuers, the woman was using the eyeliner pencil when the crash happened and the pencil jammed into her left eye socket.

“Her eye was not bleeding but there was some blood, not a lot, running down her nose — since the two organs are so closely connected,” volunteer rescuer Thanabodee Sabbodi told Amarin TV. “She was still conscious when we arrived and could hold a conversation.”

However, the woman was in severe pain and the rescuers lacked the medical expertise to handle such a delicate wound, so she had to be transported to the nearby Rajavithi Hospital. Doctors there rushed her into surgery and managed to successfully extract the pencil. Under the circumstances, the woman can consider herself lucky. Even though half the pencil had pierced her eye and lodged itself in the eye socket, it went through the sclera – the white part of the eye – so it didn’t permanently damage her vision.

Coconuts Bangkok reports that, as of this morning, the unnamed woman is able to slightly open her left eye and is expected to make a full recovery in the near future.

Does doing makeup in a moving vehicle save you some time? Sure, but is it really worth the risk of having a makeup tool jammed in your eye?

Saxon is a prolific writer with passion for the unusual. I believe the bizarre world is always exciting so keeping you up to date with such stories is my pleasure
Previous Reverend Father Seen Praying For Masquerade
Next Russia 2018! Hilarious Video Of How Russia Taught Workers How To Smile To Look Nice Visitors