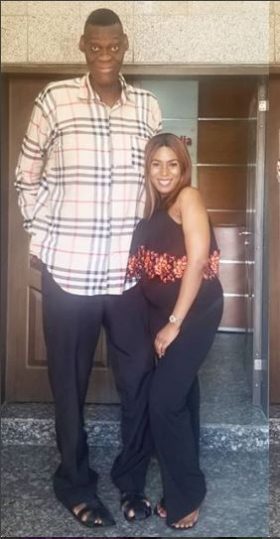 This photo says it all.

Millionaire blogger Linda Ikeji suddenly became a dwarf as she posed for photograph with Afeez Agoro, said to be the tallest man in Nigeria who is about to appear on Lindaikeji TV as a guest.

The blogger took to social media to share the photograph which was a hype for upcoming documentary on the TV station about the man.

In her Instagram post, she revealed that Afeez should have stopped growing in his 20s but he did not and Nigerian doctors didn’t know what was wrong with him.

She wrote: “See who is coming on Linda Ikeji TV. Afeez Agoro, Nigeria’s tallest man! His story is incredible.

doctors. His story is coming as a docu-series on lindaikeji.tv”

Saxon is a prolific writer with passion for the unusual. I believe the bizarre world is always exciting so keeping you up to date with such stories is my pleasure
Previous Russia Rejects Nigerian Fans’ Request To Enter Stadium With Live Chicken For Goodluck
Next Missing Woman Found Inside Python’s Stomach (WATCH VIDEO)