Russia 2018! Hilarious Video Of How Russia Taught Workers How To Smile To Look Nice Visitors 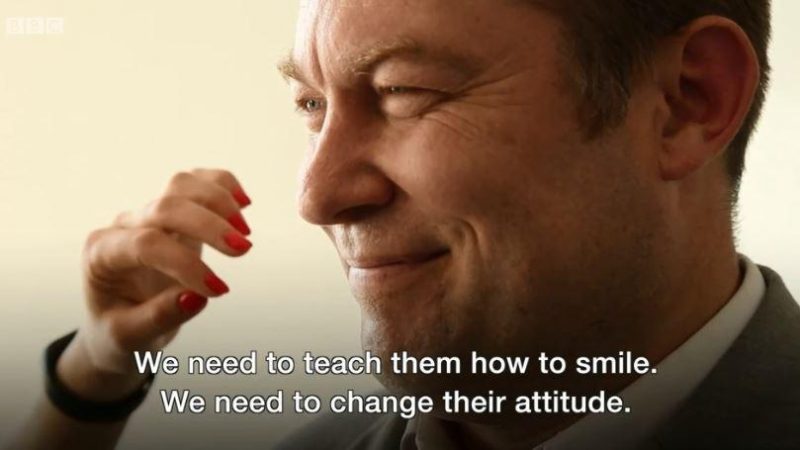 Russians are generally seen as mean-faced, unfriendly people probably because their leader, Vladimir Putin is himself a stone-faced, no-nonsense World leader.

But organisers of the 2018 World are not taking any chances at all. They do not want to argue whether or not it is true that Russians are stone-faced. So they gave workers at the World Cup venues and various contact points lessons on how to smile to visitors.

It is not just workers at World Cup venues that were given the lessons. Several organisations such as Russian Railways, various FIFA employees and the Moscow Metro conducted special training to teach their staff to be more polite and helpful to foreign visitors and, in particular, to smile more. Those receiving this lecture mainly work in the hospitality industry. They are being being guided on how to be more accommodating and how to approach giving directions to specifically world-renowned Russian landmarks, reports Telesurtv.

“Russian people usually don’t smile,” psychologist Elnara Mustafina told the BBC. “That’s why when people come to Russia they think they’re not friendly. We need to teach them how to smile.”

Russians are known to be notorious for being stoic, unlike their Western counterparts.

“We want to attract more foreign tourists; it’s good for our economy….We just want to show the beauty of Moscow and the Moscow underground,” Evgenia Zaborskaya, who is instructing some 20 transit employees in English, told the news agency.

Check this video to see onevof such lessons.

However, a hilarious video of how mean-looking Russians are being taught to smile also surfaced online. It was published on Jimmy Kimmel Live! TV show.

Watch it below but don’t try to laugh.

Saxon is a prolific writer with passion for the unusual. I believe the bizarre world is always exciting so keeping you up to date with such stories is my pleasure
Previous Woman Gets Eyeliner Pencil Stuck In Her Eyes While Doing Makeup In A Taxi (Video)
Next See The World’s First Gold-Plated Chicken Wings Launched By New York Restaurant (Watch Video)