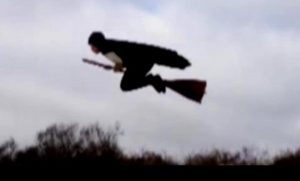 This is a bizarre story coming from  Zimbabwe.

A 5-year-old boy is currently struggling for freedom after reporting to his father, how a neighbour uses him for witchcraft activities, including flying at night, eating people’s liver, and using his buttocks to open locked doors at night.

The incident happened in in Kezi, Matabeleland South province where community members were left shocked after the five-year-old boy told them at a meeting that he was fed up with being used by a neighbour in her witchcraft escapades, reports The Maravi Post.

At first the troubled boy, who cannot be named for ethical reasons, told his father that he was fed up of being used by a neighbour in carrying out witchcraft activities.

According to My Zimbabwe online, the boy went on to say that they eat human liver and fly using a winnowing basket or at times ride on a donkey and open community member’s doors using their buttocks.

Speaking to B-Metro the father said the neighbour had not stopped using the boy in carrying out witchcraft activities.

“I do not know what I should do! I thought by exposing her at a community meeting she would stop but umfana (boy) always tells me that the woman is still using him when conducting her witchcraft and now my fear is that she will end up killing my child,” he said.

In an interview, the boy in question confirmed that the neighbour was still using him in carrying out witchcraft activities.

“We are still flying out at night using the winnowing basket, at times we eat human liver of the recently dead people and open doors by turning our backs and push the door open with our buttocks,” he said in the presence of his father and other family members.

The strange matter was reported to village head Mitsho Nyathi who then convened a meeting which was attended by the entire village and secretary to Chief Nyangazonke.