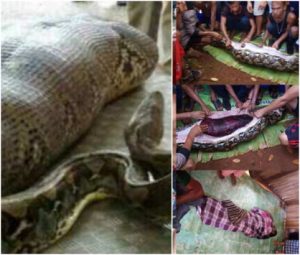 Tragedy struck in the Island of Sulawesi, Indonesia after a woman declared missing on Thursday June 14, was found in the stomach of a python.

Authorities in Southeast Sulawesi province, as well as villagers, found a python during their search for the 54-year-old woman later identified as Wa Tiba, reports Detik.com. 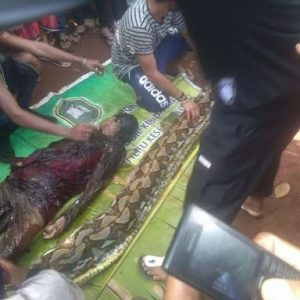 According to the reports, Wa Tiba’s things were found in the area, causing suspicion that the snake might have swallowed her. 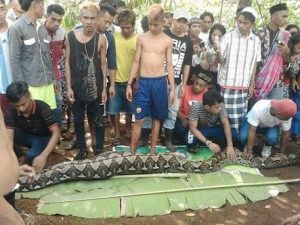 The Chief of local police, Agus Ramos said, “The villagers who were suspicious brought the python back to the village and cut it open. She was found dead inside the snake with the body intact.”

The incident left the villagers in shock as her body was yanked off the python’s belly.

Vanko is a cheerful writer whose enthusiasm for unusual stories is inspiring.
Previous Linda Ikeji Turns To Dwarf As She Meets Tallest Man In Nigeria
Next Mexicans Attending Russia 2018 World Cup Bring Life-Size Cardboard Picture Of Friend Whose Wife Refused To Let Him Go