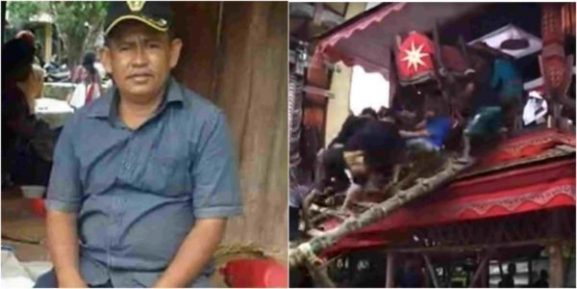 This incident is best described as double tragedy.

An Indonesian man who was one of the relatives carrying his mother’s coffin has died of severe head injuries after the coffin mistakenly fell on him.

The man was carrying the coffin with other men up to a lakkean which is a traditional wooden stilt house where bodies are stored during the funeral ceremony.

The tragic incident which happened during a funeral ceremony in North Toraja in South Sulawesi on Friday was caught on video and the footage quickly circulated on social media.

The video shows the men carrying the coffin up a bamboo ladder to place it in the lakkean.

The men are seen trying to manoeuvre the heavy coffin into position as they carry into into the ornate tower.

However, the ladder came away beneath them and the pallbearers dropped the coffin which slid down and hit them and other people in the crowd below.

A large crowd can then be seen gathering at the scene as people try to help the injured.

Via The Mirror UK

Saxon is a prolific writer with passion for the unusual. I believe the bizarre world is always exciting so keeping you up to date with such stories is my pleasure
Previous Woman Checks Newspapers For Obituaries To Rob Relatives Of The Dead
Next University Of Zambia To Train Students In Witchcraft