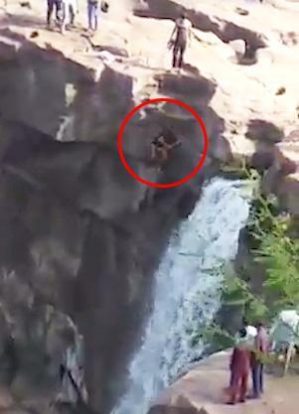 Ramjan Kagji lost his grip while clambering down a steep set of rocks in the Indian State of Karnataka before losing his grip and falling to his death.

The young man who is in his 20s risked his life to get the famous Gokak waterfall, a popular local attraction, into his photo, according to the Times of India.

Mobile phone footage which went viral captured the moment bystanders began screaming as Kagji, who is reported to have been drinking, began falling.

One of the men can be heard in the background saying: “He is gone.”

Another fellow tourist said: “We spotted him going near the edge. We warned him not to but he wouldn’t listen.”

The waterfall is infamous for being one of the region’s most dangerous selfie spots, with several reported deaths there.

It is also understood to be a notorious site for locals who wish to commit suicide.

The regional administration has apparently been unsuccessful in taking measures to secure the place with a proper fencing.

The police arrived there shortly after the man died and have opened an investigation into it.

Cops are still trying to identify the dead man and confirm if he lived locally.

This is not the first time such in happening in recent times. Just last year, a similar accident occurred, when two drunk Indian youths jumped off a cliff while trying to show off for the camera

Saxon is a prolific writer with passion for the unusual. I believe the bizarre world is always exciting so keeping you up to date with such stories is my pleasure
Previous Woman Gets Her Head Stuck In Exhaust Pipe At Music Festival
Next Nigerian Anas! University Student Chased Out Of Exam Hall For Dressing Like Ghanaian Masked Journalist