Car Thief In Florida Arrested With Monkey Clinging To His Shirt 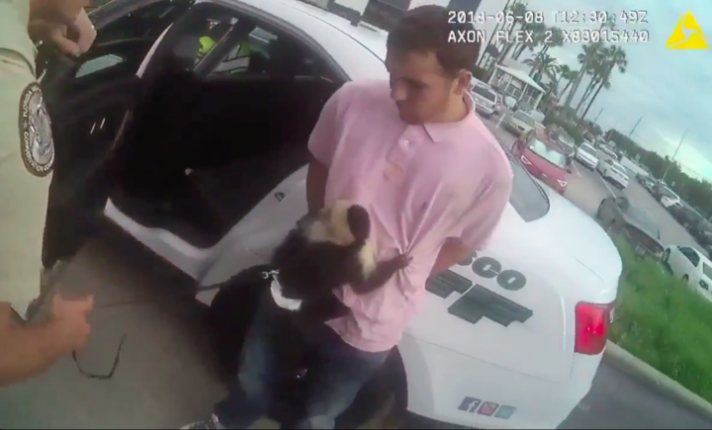 If this were to have happened in Africa some people will say it is juju or fetish assistance that the suspect was using to ensure good luck in operations. But it happened in the US and the monkey was said to be the suspect’s pet.

Police in Pasco County, Florida, arrested Cody Blake Hession after he allegedly drove a stolen car into a ditch.

Hession came out of the vehicle and began fleeing the scene.

The police caught up with him and as they were about to arrest him what they saw as his accomplice shocked them: A capuchin monkey clinging to his pink polo shirt.

The 23-year-old man from Holly Hill, said his primate companion, who was named Monk, was 3 years old and he had owned him since the monkey was 3 days old, according to WTVD TV.

Hession also said the animal came from a breeder in South Carolina and claimed there was no licensing or permitting required in that state.

However, Hession didn’t have an exotic animal permit for the monkey, so the Florida Fish and Wildlife Conservation Commission took the animal into custody and dropped Monk off at a nearby primate sanctuary, according to the Tampa Bay Times.

Hession has been charged with auto theft in a different jurisdicition, a felony. He remains behind bars on $5,000 bond.

He could face additional charges for not having the exotic animal permit, according to WFTS TV.

What a weird companion.

Saxon is a prolific writer with passion for the unusual. I believe the bizarre world is always exciting so keeping you up to date with such stories is my pleasure
Previous Man With Gun Forehead Tattoo Charged With Illegal Possession Of Firearm
Next See Viral Photo Of Spanish Woman Who Looks More Trump Than The US President Himself