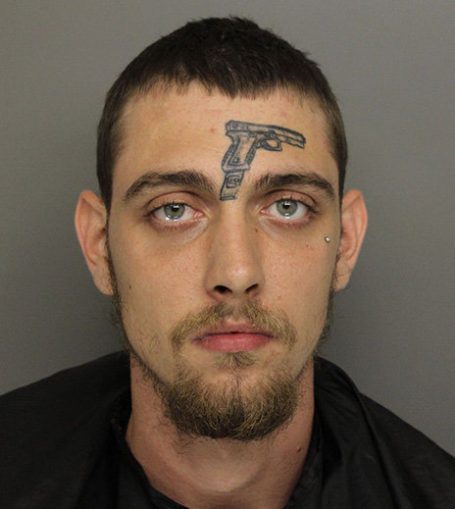 We hear of people arrested for having a gun in there bag, car, holster or hiding it in a corner. But getting arrested for ‘carrying’ a gun on your forehead is really weird. Was that what happened in this case? Find out.

A man in South Carolina who was barred from possessing firearms because of his criminal record was arrested last weekend and charged with weapons possession.

After 24-year-old Michael Vines slammed a Toyota Camry into a power pole on Saturday night, firefighters saw him toss a handgun into the grass, Greenville police reported, according to The Smoking Gun.

Authorities charged Vines with driving under a suspended license, driving too fast for conditions and unlawful carrying of a firearm, according to WYFF-TV.

The handgun police accused Vines of carrying was a fully loaded Smith & Wesson .38-caliber revolver. Vines is prohibited from owning a gun because of a rap sheet that includes multiple narcotics convictions.

Vines isn’t shy about his fondness for guns. He has a tattoo of a handgun prominently displayed on his forehead.

Greenville police made a subtle reference to Vines’ display of ink in a Facebook post, noting that “the real weapon was placed in property and evidence.”

Saxon is a prolific writer with passion for the unusual. I believe the bizarre world is always exciting so keeping you up to date with such stories is my pleasure
Previous See What A Student Was Caught With In Exam Hall
Next Car Thief In Florida Arrested With Monkey Clinging To His Shirt