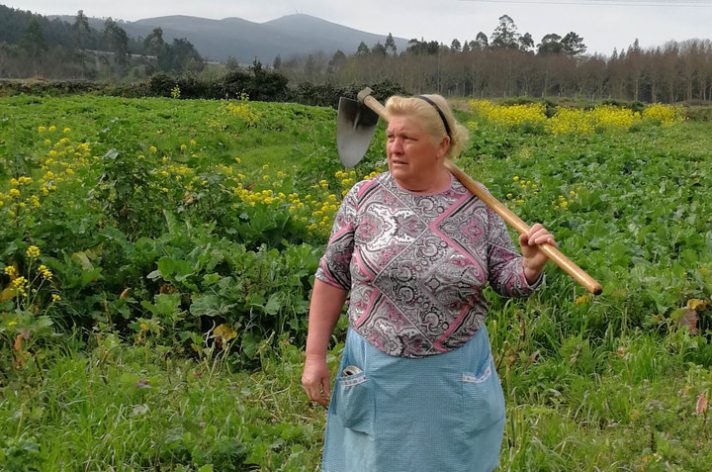 Did you miss this photo? Well, it is buzzing the internet. This Spanish woman, Dolores Leis Antelo, does not have a computer or a phone but she has become an internet sensation across the world. Why? She looks more Trump than Donald the US President.

There is a saying that everyone has a twin, and for Donald Trump that person may be a woman in rural Spain.

Dolores Leis Antelo has lived with her husband on a farm in Cabana de Bergantiños for 40 years. Although she doesn’t have a computer or a phone, Antelo has achieved viral fame since she was photographed by journalist Paula Vázquez.

Antelo posed with hoe in hand for an article about how farmers were adjusting to recent storms.

“Dolores was going to her farm to pick some cabbages,” Vasquez told the Spanish-language publication Faro de Vigo. “So I talked with her for a while, while a girlfriend was taking pictures of her, and I took the opportunity to take another photo with my cellphone.

Vasquez liked how the photo came out and posted it on Instagram.

The journalist did not immediately notice that Antelo looked like the leader of the free world.

This photo went viral after so many people noticed the semblance; it was favorited more than 8,000 times and retweeted 4,700 times, according to Newsweek.

“My photo seems to have traveled far. I say it is because of the color of my hair,” Dolores told the Spanish-language newspaper La Voz de Galicia,

Her daughter, Ana, is slightly more excited, telling the reporter, “Imagine if we were in Donald Trump’s family!”

So far, the president hasn’t tweeted about his doppelgänger, but Vasquez told Faro de Vigo that Antelo is “charmed” to discover she looks like Trump.

Antelo’s neighbours are now calling her Donald Trump’s cousin, according to Vasquez.

What a way to acquire international fame.

Saxon is a prolific writer with passion for the unusual. I believe the bizarre world is always exciting so keeping you up to date with such stories is my pleasure
Previous Car Thief In Florida Arrested With Monkey Clinging To His Shirt
Next University Girl Celebrates Her Graduation By Eating 10 Wraps Of Okpa With Three Bottles Of Soft Drink