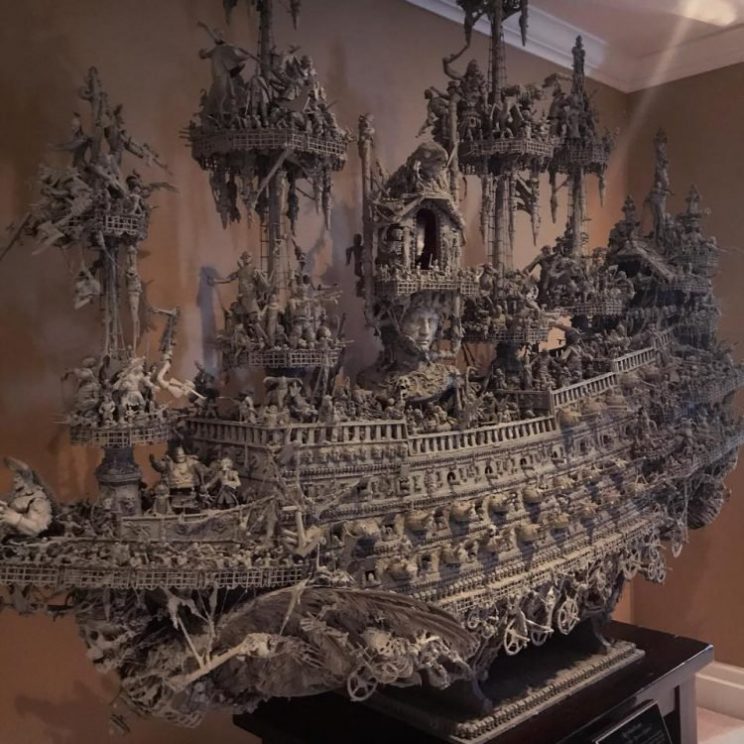 This is an incredible piece of artwork which has gone viral since it was posted on social media.

Jason Stieva has been doing Gothic assemblage art for roughly two decades, but his most intricate and impressive creation has to be the Leviathan – Ark of Apocalypse, an 8 feet high, 7.5 feet long ghost ship populated by hundreds of strange creatures.

Most of the artworks in Jason Stieva’s ongoing “Gothic Times” series are incredibly detailed, but he himself admits that the Leviathan – Ark of the Apocalypse was his most daunting project ever, and that he will most likely will never make anything like it again. And just looking at pictures of this incredible artwork, you can understand why. Although measuring over 7 meters in length, 2.5 meters in width and standing at a whopping 8 feet tall, this ghostly ship is brimming with detail. From the steampunk-inspired gears at the bottom of the ship and the dozens of cannons dominating its sides, to the hundreds of skeletons and other ghastly creatures populating its deck and multiple crow’s nests, it’s just so much to take in.

“Overall it was the most daunting project I’ve ever worked on and will probably ever create,” Stieva told My Modern Met. “There is a lot of extremely tedious detail from front to back, top to bottom. Just severing the army heads alone and sanding the back of each to be certain they would sit flush once applied with tweezers took weeks. Sourcing all the characters took quite a while. Redesigning, taking apart, rebuilding, and making the ark structurally sound long before any sculpting began took quite a while.”

It’s no wonder that it took the artist over 14 months to complete this masterpiece. And then, it was time to ship it to his client, which apparently was no walk in the park either.

“Shipping Leviathan –  Ark of the Apocalypse was by far the most stressful day at Shallow Grave and we only had to drive a half an hour to deliver her,” the artist said in an interview with Beautiful Bizarre. “She’s pretty big at eight feet tall (on a seven foot custom display table), two and a half feet wide, and roughly 200 pounds. She took me 14 months to complete. In the end we got her there in one piece.”

Even though the awe-inspiring ghost ship sculpture was completed in 2014, Jason Stieva still visits it in his clients’ house every once in a while, just to remind himself how much blood, sweat and tears went into making it. He recently posted some new photos of it on his Instagram, and it looks incredible.

Saxon is a prolific writer with passion for the unusual. I believe the bizarre world is always exciting so keeping you up to date with such stories is my pleasure
Previous Chinese Restaurant Employs Pretty Crayfish Peelers So That Customers Would Not Get Their Hands Dirty
Next See Viral Video Of Nigerian Fan Praying For Super Eagles As Their Faces Appeared On TV Screen Before Match With Iceland