Home / Europe / Incredible! This 12-Year-Old Basket Ball Player Can Dunk Even Without Jumping

Incredible! This 12-Year-Old Basket Ball Player Can Dunk Even Without Jumping 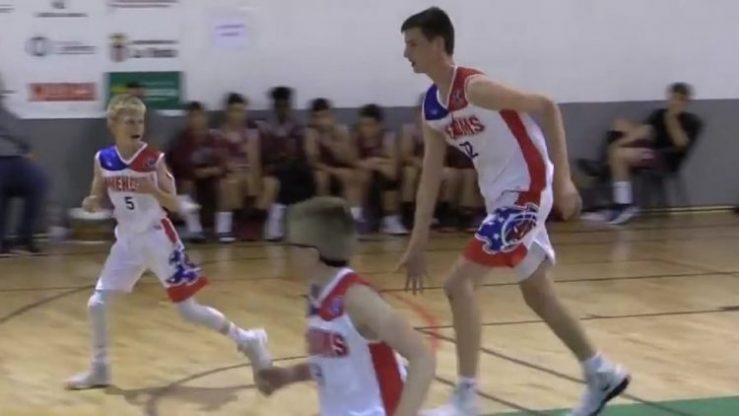 A 12-year-old boy looks like he was the one basket ball courts for people of his age was specifically meant for. Watching him you will wonder whether it is not unfair to have him in a team playing serious matches against an opponent.

Olivier Rioux is just 12 years old but he is already 6-foot-11 (2.11 meters) which makes him a huge asset for his basketball team. Not only can he shoot the ball without any of his opponents even coming close to a block, but he can literally slam dunk on the 8-foot-tall basket without his feet leaving the ground.

Olivier Rioux’s height gives him what could be described as an unfair advantage over people of his age who do not come up to his bellybutton in height. He can shoot whenever he wants, he’s literally always open for passes and as long as he’s close enough to his opponents, he can block any of their passes or shots. To say this Canadian 12-year-old is head and shoulders above his competition would be a pretty fair assessment.

Videos of Olivier completely obliterating the competition and leading his team, the Frenchy Phenoms, to victory have recently gone viral on YouTube and Facebook, and the unusually tall 12-year-old has been getting a lot of negative feedback. A lot of people seem to think that his impressive height is an unfair advantage over all the other kids, who, no matter their talent, are pretty much powerless against him. Some publications have gone as far as to mock Rioux and the Frenchy Phenoms supporters for celebrating after he scores, as if it were some great achievement.

Here are some reactions from online sport journalists to Olivier Rioux’s total domination:

“Being two feet taller than everyone else and still staring down people after your blocks is an all-time rude move. I love it,” Wrote CBS Sports‘ Pete Blackburn. “Things might not come as easy for Rioux when he graduates to taller rims and taller, more skilled competition, but that doesn’t matter right now. All that matters is that we have these highlights for our entertainment, and that Rioux is living the dream — or at least my dream — for the time being.”

“Watching a seven-foot kid mercilessly destroy his competition on an eight-foot rim is magical. It feels like we’re witnessing something from a kid’s movie, not a child’s nightmare,” James Dator wrote on SB Nation. “Seriously, what are you supposed to do when you’re facing Rioux and he’s a solid three feet taller than you are? That’s a rhetorical question, because the only answer is to abandon all hope, give up, and wait for the sweet release of death.”

It also worthy to note that Olivier has an older brother, Emile, who also plays basketball. He was just 6-foot-4 at age 12, and now, at 15-years-old, he is only 6-foot-9, which make him shorter than his kid brother but still considerably taller than most teens his age.

Despite the criticisms against Olivier, we should note that this boy is just a kid playing in a basket ball league meant for people of his age.

Saxon is a prolific writer with passion for the unusual. I believe the bizarre world is always exciting so keeping you up to date with such stories is my pleasure
Previous Japanese Public Service Issues Public Apology For Employee Who Went For Lunch Break Three Minutes Early
Next Chinese Restaurant Employs Pretty Crayfish Peelers So That Customers Would Not Get Their Hands Dirty