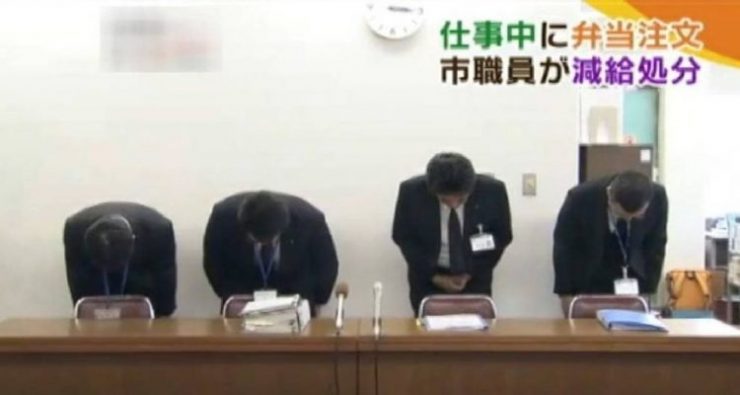 There are countries where people who work in public service treat the establishments as no man’s work, They behave any how and go unpunished. Definitely not in Japan where the public service is treated seriously and people who run it see themselves as truly serving the public.

The public service in Japan recently apologised publicly for the wrong-doing of just one employee.

The public apology which was made through a widely televised press conference has generated controversy as some people are feeling that it was a waste of time and resources for what is regarded as a minor offence in that country’s public service. But here’s the story.

A 64-year-old employee of the waterworks bureau in the Japanese city of Kobe was recently fined and reprimanded by his superiors for going on his lunch break three minutes early, on more than one occasion.

This became an offence because the lunch break at the Kobe waterworks bureau starts at 12 pm sharp and lasts until 1 pm, but this employee looking for “a change of pace” decided to leave his desk a few minutes early to go get himself a bento box from a nearby restaurant. Unfortunately for him, a senior colleague looking out the window from his office, saw the unnamed offender heading to the restaurant on one of his unsanctioned escapades, and reported him to management. An investigation revealed that the man had started his lunch break three minutes early a total of 26 times in the last 7 months, which they apparently decided was a huge deal, reports Oddity Central.

This offence was not taken lightly as the managers of the waterworks bureau organized a televised press conference at the end of which they bowed to the Japanese people in apology for their employee’s “deeply regrettable” actions. They said that the 64-year-old had violated a public service law that required public officials to “concentrate on their jobs,” and had to suffer the consequences. Apart from being reprimanded by his superiors, the man was also fined half a day’s pay for his actions.

“It is very regrettable that such a scandal has occurred, I am sorry,” one of the managers said during the televised press conference.

This action did not go without serious controversy among the Japanese public. The widely televised public scolding of the employee caused quite the outrage on Japanese social media, with many people coming to the man’s defence and pointing out that he had only left his desk three minutes early, and had only done it once a week, on average.

“What about all the politicians who sleep in parliament? They ought to be fired, then,” one person commented.

“Absolutely ridiculous – arranging this formal apology with the press would’ve wasted more time than the three minutes he spent buying his lunch every now and then,” someone else wrote.

Apologising for what can only be described as minor public servant offences is pretty common in Japan. For example, last month, a railway company issued a formal apology for one of its trains leaving 25 seconds early.

The public service in Japan seems not to be playing with truly serving the public.

Saxon is a prolific writer with passion for the unusual. I believe the bizarre world is always exciting so keeping you up to date with such stories is my pleasure
Previous University Girl Celebrates Her Graduation By Eating 10 Wraps Of Okpa With Three Bottles Of Soft Drink
Next Incredible! This 12-Year-Old Basket Ball Player Can Dunk Even Without Jumping