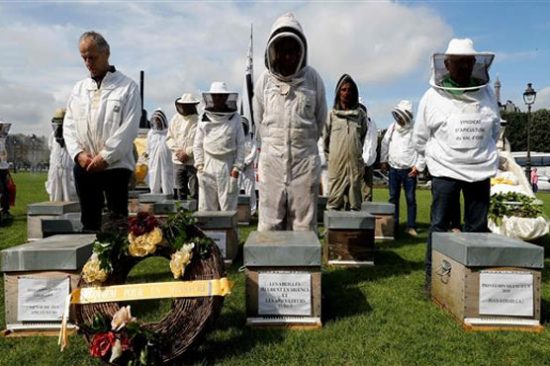 A group of French bee keepers and environmental activists protesting the use of pesticides to kill bees have staged a mock funeral in Paris for bees that have been killed through use of pesticides.

The incident which took place on June 5, was staged by the protesters against pesticides they say are killing insects crucial for the eco system.

Some protesters, wearing beekepers masks and overalls, lay motionless in coffins while others stood, heads bowed in respect as a bugle played during the ceremony on a patch of garden near the Les Invalides museum.

The environmental activities are saying bee colonies in western Europe have been ravaged by the use of neonicotinoids, a group of pesticides based on the chemical structure of nicotine.

Bee keepers in France have pressed the government to take more action to protect their livelihoods.

“It’s been talked about for 20 years now but nothing’s been done about it,” said one campaigner.

“There’s going to be a big blowout and in the very short term,” said another, both dressed in white beekeeper suits.

An EU court upheld on Thursday a partial ban on three neonicotinoids, saying the European Commission had been right in 2013 to restrict their use to protect bees.

Reuters reports that the restriction means they cannot be used on maize, rapeseed and some spring cereals.

Crop chemical companies have argued that real-world evidence is not there to blame a global plunge in bee numbers on neonicotinoid pesticides alone.

The bee keepers and environmentalists staged the funeral days after lawmakers failed to secure the inclusion of a ban on the use of glysophate — widely used in weedkillers – in new legislation even after President Emmanuel Macron promised its prohibition in three years time.

What a weird way to attract attention to an advocacy campaign.

Saxon is a prolific writer with passion for the unusual. I believe the bizarre world is always exciting so keeping you up to date with such stories is my pleasure
Previous Mass Nude Photograph To Go Ahead After Supermarket Giant Says ‘Yes’
Next Woman Spends Two Weeks In Dentition After Accidentally Jogging Across Border Into US