Shock As Family Finds 111 Baby Cobras In Their House 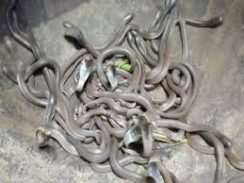 A family in India have survived the worst shock of their life after finding not less than 111 baby cobras in a room in their house. The incident happened in Bhadrak district in the eastern state of Odisha, India.

The family narrowly escaped death as no one was bitten by the dangerous reptiles before they were found and removed.

The family reportedly found the baby cobras and called snake help line after which a rescue team came and removed the reptiles.

It is suspected that the eggs cobra eggs from which the reptiles hatched were laid by a female adult cobra which was no where to be found when rescue team arrived the house. The eggs were said to have been found in a termite mound in the house. It was reported that only about 26 eggs had hatched and no one knows where other eggs may have hatched. Female cobras hatch between 20 to 40 eggs at a time, which incubate between 60 to 80 days.

A manhunt is ongoing to track down the adult cobra that laid the eggs which is believed to be alive somewhere in the community.

Saxon is a prolific writer with passion for the unusual. I believe the bizarre world is always exciting so keeping you up to date with such stories is my pleasure
Previous See Viral Video Of Nigerian Fan Praying For Super Eagles As Their Faces Appeared On TV Screen Before Match With Iceland
Next Mass Nude Photograph To Go Ahead After Supermarket Giant Says ‘Yes’