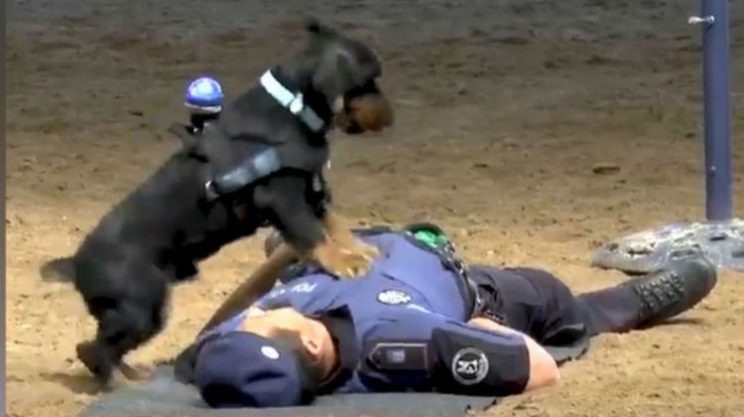 A police dog, Ponto, is currently buzzing online. The dog became famous after the Madrid Municipal Police shared a video of him on Twitter while he was performing CPR on a fallen colleague.  CPR is Cardiopulmonary Resuscitation is a medical procedure involving repeated cycles of compression of the chest to make the heart pump for artificial respiration.

Though Poncho’s act was only a training simulation, his life-saving skills and quick reactions left a lot of people impressed. What is remarkable is that as soon as his human partner collapses to the ground and remains seemingly unconscious, Poncho springs into action, running to him and jumping with his front legs on the man’s chest, while also laying his head on the man’s mouth to check his breathing. He doesn’t stop until the collapsed trainer gets up.

The video has so far been watched by over 2 million people on Latino social media alone, most of whom can’t stop praising his performance.

The dog’s actions has impressed many observers who believe he deserves special honours.

Saxon is a prolific writer with passion for the unusual. I believe the bizarre world is always exciting so keeping you up to date with such stories is my pleasure
Previous Ghana’s First Money Ritual Church Opens With Thousands Rushing To Become Members (VIDEO)
Next Woman Poisons Dozens of Guests At Housewarming Party While Trying To Kill Family Who Made Fun Of Her Cooking