Home / Europe / Woman Swept Away by Wave 18 Months Ago Recently Found Unconscious On Nearby Beach. Wearing Same Clothes As When She Disappeared

Woman Swept Away by Wave 18 Months Ago Recently Found Unconscious On Nearby Beach. Wearing Same Clothes As When She Disappeared 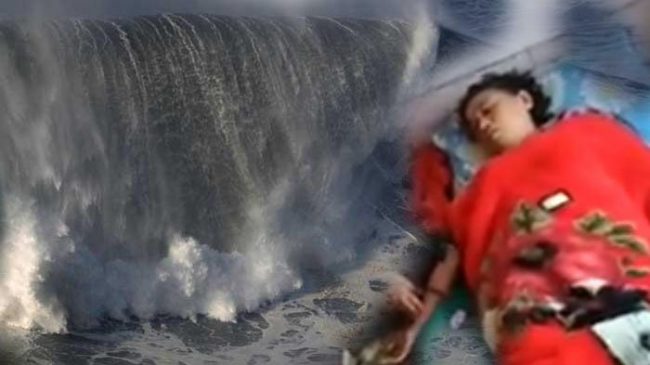 An Indonesian woman who was swept away by a huge wave one and half years ago has been found unconscious on the same beach she disappeared wearing the same clothes she wore when she was swept away.

The 52-year-old Nining Sunarsih who was allegedly found four days ago was on vacation in Sukabumi, West Java, when she was swept away by a strong wave on Citepus Beach, and carried out to sea by strong currents.

Eyewitnesses present during the incident said they heard the woman screaming and waving her hands for help, but they were too scared to go in after her. Search and rescue operations could not find her until a week after the tragic disappearance, when a dead body was discovered in the area. They asked Nining’s family to come and identify the body, and even though it was reportedly in very bad condition, her relatives were convinced that it wasn’t her, because it lacked a distinctive birthmark on the abdomen, and the fingernails looked very different.

It was reported that authorities ordered a DNA test on the found body to confirm whether it was the missing woman or not. They compared the DNA of the body to that of the woman’s son, Wanda, and found that they didn’t match. Still, with search operations yielding no results and the chances of Nining Sunarsih actually being alive after several days lost at sea, authorities called off the search and pronounced her dead.

Though the woman’s family still believed she was not dead but still alive somewhere, the story took a weird turn at some point.

Reports have it that a few days ago, Nining’s uncle allegedly had a dream about the woman, in which she told him to look for her on  a beach in Palabuhanratu, close to the place where she had disappeared from over one and a half years ago. He didn’t pay much attention to the dream at first, but after allegedly having the same dream on the same thing on multiple times, he finally told the family about it and decided to go look for their long lost relative.

What a weird way to participate in your own search and rescue operation after disappearing over a year ago.

Saxon is a prolific writer with passion for the unusual. I believe the bizarre world is always exciting so keeping you up to date with such stories is my pleasure
Previous Trending! #BloodOnTheFlag! Celebrities, Others Protest Killings In Nigeria With Graphic Photos
Next See Celebrity Massage Therapist Who Bites Her Clients To Promote Blood Circulation, Relax Her Patients