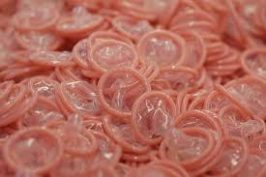 When you here the word “Condom” the first thing that jumps to your mind is “protection during sex.” But that has changed because home-based floor polish makers are now using condoms to make floor polish because it makes the floor shine better.

Bulawayo24News reports that floor polish makers are reportedly using condoms when “cooking” their product because they become a “high shine” floor polish.

The report says condoms replaced what was the popular ingredient, empty Sta-Soft containers because of the long lasting shine they produce as well as easy accessibility.

A floor polish maker who feared being identified thinking that she could be arrested (which won’t happen anyway) told B-Metro that the formula was arrived at after years of trying different plastics in the cut-throat home made floor polish industry.

“There is stiff competition and one has to make sure she makes polish which is easy to apply and shine. Someone recommended use of condoms and it proved to be very good compared to plastic containers,” she said.

“Condoms are quick to melt and  stick to the floor which is good. Ever since I started using this new ingredient, my clientele has increased and I know it is because of these condoms,” she added.

“When making polish, we always want cheap and readily available ingredients. To get profit one has to buy tar and paraffin,” she said.

Saxon is a prolific writer with passion for the unusual. I believe the bizarre world is always exciting so keeping you up to date with such stories is my pleasure
Previous Man Rapes 14-Year-Old Daughter To Stop Poverty
Next Russian Couple Divorce After 14 Years Of Marriage Because Of Messi, Ronaldo Argument