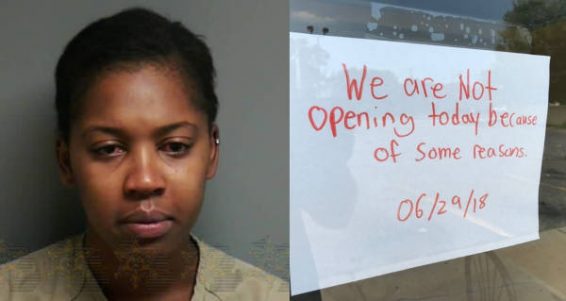 A woman is currently cooling off in police net after she was arrested for biting off part of the ear of a Chinese restaurant waiter because she was not satisfied with the services she was given.

Jade Anderson, 24, from Michigan, United States, was unhappy with her order at China 1 restaurant  in Mount Clemens a few days back, reports Daily Mail UK.

The wife of the owner and their son who was described by a witness to be around 10 or 11 years old, was translating Anderson’s complaints. According to the newspaper, she allegedly pushed the boy to the ground and threw her food to the floor.
After she began assaulting the wife, the owner stepped in to try and intervene. The 24-year old then began assaulting the owner. As she was being pushed out the door, she allegedly bit the man’s ear, partially detaching it.
Policemen were called to the restaurant to forestall order. They found the owner with his ear partially bitten off and a woman with a large bump on her forehead. Anderson was arrested by authorities and booked on charges of assault with intent to maim charge.
She is being held at the Macomb County Jail in lieu of a $20,000 bail and is due in court on July 11. The Macomb County Sheriff’s Office said that the owner was taken to a hospital and treated for his injuries while the wife was treated at the scene. The son was not injured, deputies said.

What a weird way to express dissatisfaction with services given to you in a restaurant.

Saxon is a prolific writer with passion for the unusual. I believe the bizarre world is always exciting so keeping you up to date with such stories is my pleasure
Previous See Most Expensive Designer Handcuff That Costs N23 Million, It’s A Gucci Brand
Next Zimbabwe’s Ugliest Man Proud To Win Title For The 4th Time (VIDEO)