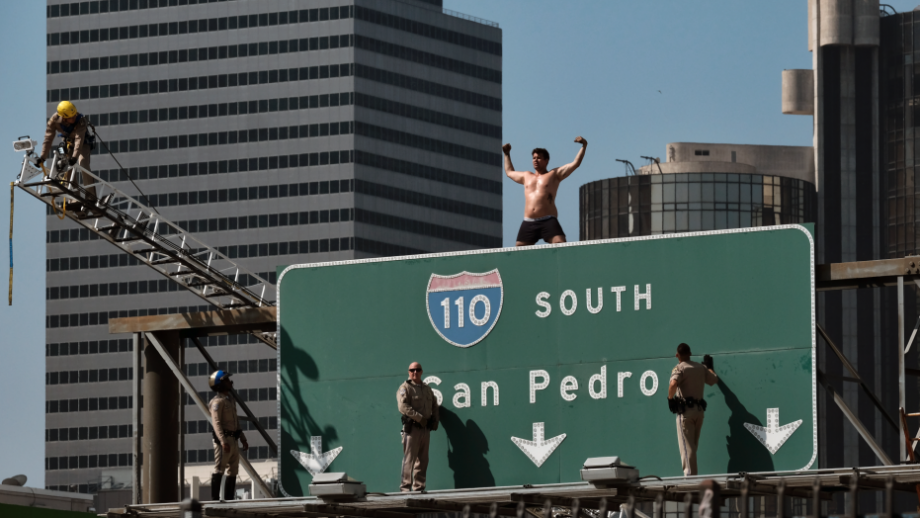 You should watch this video to see the unbelievable things people can do to grow a career.

A man in underwear described as an aspiring rapper is currently in trouble after he held up traffic in California for long and backflipped off a freeway sign allegedly to get footage for his up-coming rap video.

The man identified as 29-year-old Alexander Dunn, wearing only boxer briefs and tennis shoes, climbed onto the sign and proceeded to hang protest posters, dance around and make strongman poses.

His antics got traffic backed up for miles on State Route 110 as firefighters placed inflatables underneath the man and extended ladders to him.

Foxnews reports that the signs that Dunn put up read ”Fight pollution, not each other” and “Give a hoot, don’t pollute,” while cars passing on the other side of the freeway at times honked at him and one even shouted to police: “Shoot him!”

The standoff ended when Dunn did a backflip off the sign down to an inflatable below. Though he was unhurt, police still arrested him on charges including trespassing on state property and suspicion of delaying a police officer, according to the Los Angeles Times.

The newspaper said Dunn, 29, is an aspiring rap artist, and according to his producer, he was being recorded throughout the entire episode with the images intended for release in a music video.

Though this happened on Wednesday June 27, the viral video is still buzzing the internet.

What a weird way to attract attention to your music career. But wait a minute, Dun may have achieved that goal as the entire world now knows he exists.

Saxon is a prolific writer with passion for the unusual. I believe the bizarre world is always exciting so keeping you up to date with such stories is my pleasure
Previous ‘Ridiculous’ Transparent Plastic Trousers Back On Board But Fashion Lovers Are Not Impressed
Next If You Think Your Job Is Hard, Take A Quick Look At This Man Who Feeds Crocodiles (VIDEO)