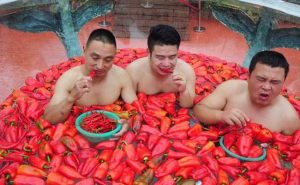 A young in has won the Chili-Eating contest in China by downing an unbelievably gut-bursting 50 peppers in about 68 seconds.

The young man, Tang Shuaihui took home a 3-gramme 24-karat gold coin for winning the competition, which is organized by a local theme park in the county of Ningxiang, China. The competition is now in its second year.

An annual chili pepper festival kicked off Monday in central China’s spice-loving Hunan province with a chili-eating contest in which the winner set a blistering pace by downing a gut-busting 50 peppers in just over a minute.

Ten contestants each held plates heaped with 50 Tabasco chili peppers and battled to be the first to finish off the red-hot fruits, while doctors watched by the side.

Eventual winner, Tang cleared his plate in just 68 seconds in a contest held in nearly sweltering temperatures weather and as competitors sat in a shallow pool filled with water and three tonnes of floating chilis.

“He finished them at an amazing speed, barely after the emcee had finished speaking,” said Sun Minying, an employee at the theme park, called the Tanhe Ancient City.

The Tabasco pepper has a rank of 30,000-50,000 on the Scoville Heat Scale that measures the piquancy of chilis, which puts it somewhere between a jalapeno and a habanero.

The peppers bobbing in the pool, however, were of a far weaker variety, partly to avoid irritating the contestants’ skin.

Hunan cuisine is marked by its fiery peppers and richly coloured dishes and is considered among China’s eight great food traditions along with Sichuan, Cantonese and other cuisines.

The festival lasts until the end of August, with a fresh chili-eating contest held daily.

What a contest. You may be wandering whether the internal organs of those participating in the contest is wired differently for them to be eating such amount of pepper without literally bursting up.

Vanko is a cheerful writer whose enthusiasm for unusual stories is inspiring.
Previous Secondary School Teachers In Kenya On The Run As Students Burn Schools And Beat Them Up For Refusing To Allow Cheating In Exam
Next Meet Zsa Zsa, The English Bulldog That Won This Year’s World Ugliest Dog Contest