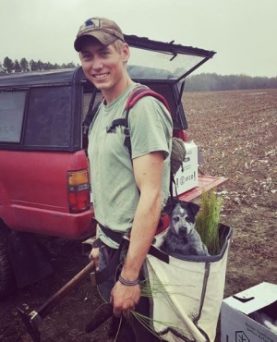 This sounds pretty weird but 20-year-old Dylan McWilliams from Colorado in the USA has actually experienced deadly attacks by shark, beer, and rattle snake. He survived them all.

The beer and shark attacks came in just over a year while the rattle snake attack happened a few years earlier.

After he was bitten by a shark on Thursday, April 19, he told the BBC how he had survived beer attack a year earlier.

He woke on his camp bed to notice that a beer had grabbed his head and was dragging him away. He had to keep punching the beer before he was freed about 15 meters away fro his bed.

According to New York Post, McWilliams who is a wildlife survival instructor has also been bitten by a bear and a snake in the past few years.

He sustained deep lacerations to his leg when a tiger shark bit him as he surfed on a body board in Hawaii.

“I saw the shark underneath me. I started kicking at it – I know I hit it at least once – and swam to shore as quickly as I could,” he told the BBC.

“The scariest part was swimming back,” he told Hawaii News Now. “There was blood behind me. I didn’t know where it was.”

Medical experts had to give him seven stitches to his leg after the shark attack.

McWilliams was also attacked by a bear when he camped in Colorado a year ago. A black bear, weighing about 140kg, got into the camp in the early hours of the morning and grabbed hold of his head.

He told the Honolulu Star-Advertiser he could hear his skull cracking.

According to News.com, luckily he managed to escape on this occasion – and needed just 9 stitches for his wounds.

While hiking in the mountains in Utah three and a half years ago, Dylan was bitten by a rattle snake. Fortunately the snake released very little venom and he was ill for only a few days.

“I’m either really lucky or really unlucky,” he quipped to Honolulu Star-Advertiser.

McWilliams holds a weird record of surviving three deadly attacks from dangerous animals in three and half years.

Saxon is a prolific writer with passion for the unusual. I believe the bizarre world is always exciting so keeping you up to date with such stories is my pleasure
Previous Meet Zsa Zsa, The English Bulldog That Won This Year’s World Ugliest Dog Contest
Next Nigerian Man & Girlfriend Die While Romping Inside Car After It Rolled Down Into River