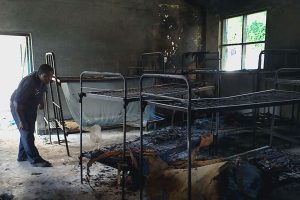 This is what the education system in Kenya is currently grappling with.

Students who are unhappy with strict measures recently introduced by the Education ministry to prevent cheating in exams across the nation’s secondary schools are burning down schools and beating up teachers, including principals, most of whom were newly sent to the schools to curb wide-spread cheating.

As the attacks intensify, students have torched seven boarding schools in that country in the last week while protesting against the introduction of tough new measures to prevent cheating in examinations due in three months, education minister Amina Mohammed has said, at a press conference.

According to Mohammed, in one of the incidents at one school, students demanded an undertaking from the principal that he would facilitate cheating in the examinations.

Police in Kenya have intensified efforts to end the unrest, arresting 125 students, a statement by the ministry said.

Intense investigations are being carried out with a view to arresting the situation.

According to the report prepared by the Ministry’s Quality Assurance and Standards, students in most of the affected schools wanted their principals to make a commitment that they would help them to cheat in the Kenya Certificate of Secondary Education (KCSE) examinations, slated for October and November.
The principals and teachers in the affected schools reported that they were being put under pressure to abet cheating, failure to which the students take to strike.

New investigations commissioned by the Education Ministry reports that at least 30 secondary schools have been attacked by unhappy students since the beginning of the year.

According to Daily Nation, most of the affected schools have new principals, some of who had been tasked to stop rampant cheating in the institutions following a survey of “marked” schools based on reports on examinations in previous years.

In one instance, Form Four students in Ortum Secondary School went on strike in May because their newly-appointed principal failed to guarantee to assist them to cheat in the exams.
“Students wanted the principal to declare that he will assist candidates during the KCSE examinations,” the report said of the Ortum unrest.

This is really not good times for the education system in Kenya.

Vanko is a cheerful writer whose enthusiasm for unusual stories is inspiring.
Previous Venomous Black Scorpion Spotted Carrying Babies On Her Back
Next Man Eats 50 Peppers In 68 Seconds For Chili-Eating Contest In China