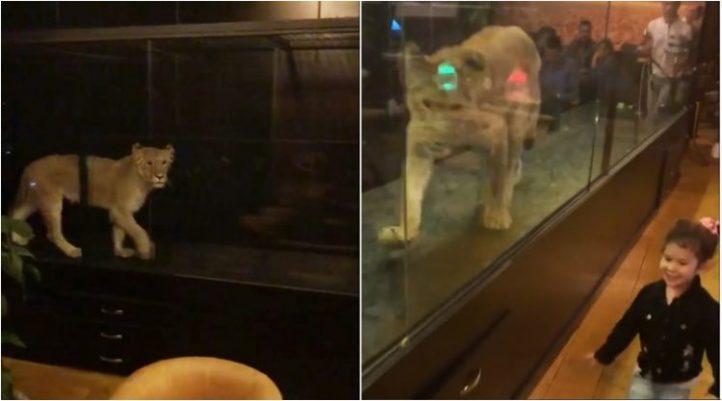 A Cafe in Istanbul, Turkey, which adopts unusual approach to entertain its customers is currently causing outrage among social media community.

The animal cafe in Istanbul’s Beykoz district has been accused of animal cruelty after a video of a young lion nervously pacing back and forth in a narrow glass box inside the venue went viral online.

The owner of Mevzoo, an animal cafe in Istanbul’s Beykoz district has been accused of animal cruelty and abuse after videos of Khaleesi, a one-year-old lion, pacing through a glass box built in the center of the cafe and chasing after a small girl were shared on social media. People were outraged that an endangered wild animal was confined to a space less than a meter wide, which was barely enough for it to turn around, and used as entertainment.

Reactions got worse after it was revealed that Mevzoo also uses parrots and other rare birds, caged crocodiles and horses to attract customers. 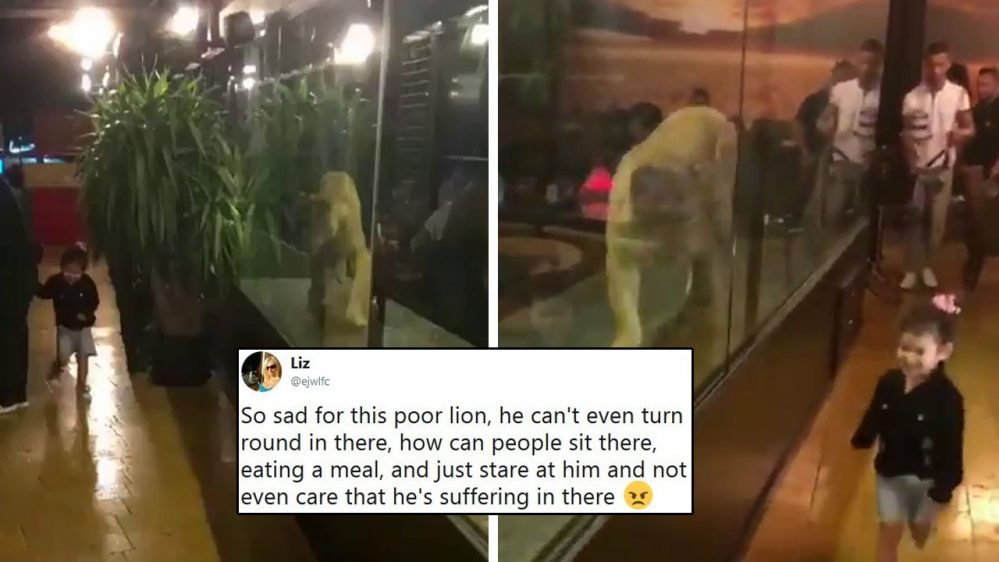 It was gathered that Mevzoo is licensed as a ‘Class B’ Zoo and Animal Rehabilitation Center, by the Ministry of Forestry and Water Affairs. The owner, Cengiz Şıklaroğlu, recently told Turkish newspaper Cumhuryiet that he not only has all the necessary documentation required by law, but he also ensures all the proper conditions for the animals.

Şıklaroğlu added that he only takes in animals that are difficult to care for at the city zoos and takes care of them at his own expense. He claims to invest large sums of money on the food and medical treatments of the animals in his care and that their living spaces are several times larger than the space recommended by the World Association of Zoos and Aquariums.

In his reaction to the outrage expressed by people on social media, the owner of Mevzoo said that it is a result of people letting their emotions get the better of them and not knowing all the facts.

He said because people don’t know the legal requirements that have to be met in order to get a zoo license – which he claims is one of the hardest licenses to get in Turkey – they are quick to yell animal cruelty. but he has done everything by the book.

However, after the controversial video of Khaleesi the lion got international media attention, and a Change.org petition was started to free the majestic feline from its improper enclosure, the Ministry of Forestry and Water Affairs in Turkey opened an investigation and a team was sent to check that the animals at Mevzoo were well-taken care of. Cumhuryiet reports that investigators allowed Cengiz Şıklaroğlu to keep all the animals, but ordered him to dismantle Khaleesi’s glass cage within three months.

According to Turkish media, Mevzoo cafe is home to 35 rabbits, several flamingos, four snakes, four horses, two parrots, two crocodiles and an iguana, as well as Khaleesi the lion.

Saxon is a prolific writer with passion for the unusual. I believe the bizarre world is always exciting so keeping you up to date with such stories is my pleasure
Previous Young Lady Remanded In Prison Custody After Sharing Video Of Herself Ma3turbating Online
Next After 66 Years, Man With The World’s Longest Nails Finally Cuts Them Off