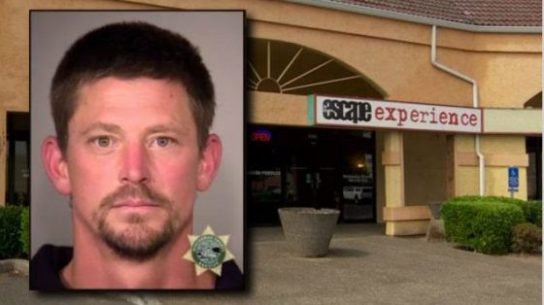 A man in Vancouver, USA, has ended up getting himself trapped and arrested after he called police for assistance because he couldn’t find his way out of ‘escape room’s business he broke into.

In an ironic scenario, the man made his way inside and created his own escape adventure before finally calling police Ilona himself.

The challenge with escape rooms is that getting in is easy but finding your way out could be an uphill task.

For Rye Wardlaw, the escape puzzle had to end with a 911 call because he began to panic after he couldn’t get out.

Rob Bertrand, owner, NW Escape Experience which Wardlaw broke into, “Sure enough, somebody had managed to break their way into our business and trap themselves.”

According to police, Wardlaw admitted he knocked off the back door knob, then broke through a lock box to see if the gas was working in the electrical room.

While there he smashed something through the wall.

“He probably poked his eye through and was like, ‘ah, that’s going to be too tough,” says Bertrand.

While still trying to crack the escape puzzle, Wardlaw found some keys but was faced with the challenge of finding out they unlock.

According to court records, after finding the keys, Rye then said he got into this empty space next to NW Escape Experience to go to the bathroom and eat his burrito.

After that, he told the deputies he went into the escape room business where he says he went through the front door, but owners say otherwise.

Bertrand says that bang at 3:58 a.m. is the moment the lockers came crashing down. Behind them, the door to the empty space.

Bertrand says Wardlaw celebrated, by making his way back to the kitchen and inside he found one lone beer that was used for a prop.

Somewhere in this bizarre story, Wardlaw needed some help, so he called 911 on himself.

Clark County deputies responded – obviously a little confused as to where the heck they were too.

“What’s funny is the cops are actually in a sense playing escape room right now, because they’re trying to figure out how to get in to here,” says Bertrand.

Deputies eventually spotted Wardlaw walking away outside. His escape was only short lived.

Weird isn’t it? Even the police got into the escape game momentarily but were able to catch Wardlaw.

Saxon is a prolific writer with passion for the unusual. I believe the bizarre world is always exciting so keeping you up to date with such stories is my pleasure
Previous Burglar Uses Underwear To Conceal Face From Security Camera (VIDEO)
Next Saudi Woman Arrested For Hugging Male Singer On Stage (VIDEO)