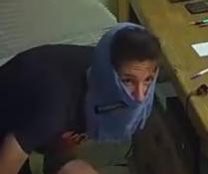 A man has earned the nickname ‘underwear bandit’ after he was seen in a video covering most of his face with a pair of underpants as he buggled a house.

The video was posted to Facebook by Texas Police Department as they asked for assistance of the public in identifying the man who was seen climbing into Enchanted Rock and Landscape Supplies through a window.

The post uploaded by the police is asking anyone who recognized the man now known as ‘underpants bandit’ to contact the police.

What a weird item to use as hood while committing a crime.

Saxon is a prolific writer with passion for the unusual. I believe the bizarre world is always exciting so keeping you up to date with such stories is my pleasure
Previous World’s Most Cloned Dog Has 49 Copies Of Itself
Next Burglar Calls 911 For Help After He Got Trapped In Escape Room Business