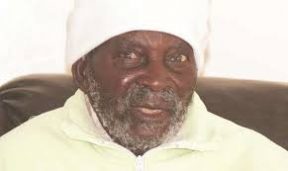 A popular Prophet and Church leader in Zimbabwe has been given two separate burials at the same time by his church and family members due to serious feudamong church factions.

As that was happening, his children and close family members who did not attend the burial held at the shrine of the white garment church because of bitter infighting in his church, held their own funeral wake at their homestead a few kilometres away.
Gomo is said to have prophesied that former president Robert Mugabe would become Zimbabwe’s first leader, and this led former President Robert Mugabe to develop interest in solving the feud in Gomo’s church but to no avail.

The nonagenarian left his family in 2015 following an acrimonious dispute and settled at the shrine. His children claimed he was being kept at the shrine against his will, reports Bulawayo24.

Mugabe tried to intervene in the dispute and even set up a cabinet committee to investigate claims that Zanu-PF succession politics was at the heart of the infighting.

The fight between the church and Wimbo’s children raged until his death and his funeral on Friday could not unite the warring parties.

His son Abevaishen, who doubles up as headman, described the church’s conduct as ungodly.

“There is conflict between church members and the family because of the way he left here and started staying at the shrine. He was forced,” Abevaishen told The Standard at the family homestead after Wimbo was buried at the shrine.

“The matter was brought before former president Robert Mugabe and a committee was set up.

“It made enquiries, but nothing happened. We were expecting that with the new leadership, things would be corrected, but that has not been the case.

“Nothing has happened and now our father has passed on and has been buried there [at the shrine] without his family.
“The whole family and other church members are here at his homestead.

“Culturally, when a person dies even if he is made a national hero, that person will have to lie in state at his home with his relatives around, but this has not happened for us.

“This is a new thing to us and it is very strange that we have two separate funerals at the church and homestead and the government leadership is there and folding their hands.”

Abevaishen said they were disappointed that Mashonaland Central Provincial Affairs minister Martin Dinha had failed to help them pay their last respects after the church leader died.

“We tried that and failed. The former president tried it and there were no results,” he said.

“We have tried it again this time around and government leaders including Dinha were here on Thursday, but there are no results.

“We wished our father would have just come here even for a few minutes before burial.

“This is where his wives are, but when Dinha and company left, they didn’t bring any answer.

“Today (Friday) a new team led (Zanu-PF) by politburo members came and we asked them and they said they didn’t know anything.

“The country’s leadership has let us down. “They failed to solve this issue for three years and “I don’t think this case was supposed to drag for three years without a solution.

“Is it possible that the children and wives cannot see their father? We feel we have been deprived of our rights and the leadership that we have has totally failed us.”

The family said they foresaw a permanent split in the church following Wimbo’s death.

“The issue of leadership is not very necessary at the moment. What’s important is to just pray like what we used to do in his absence,” Abevaishen said.

“There is no way forward because he has been buried already and there is nothing we can do.

“However, there are two churches now — the one at the shrine and the other here. We are going separate ways.”

Wimbo’s other son, Exnevia, said the family was going through a very painful period.

“This is very painful. We know that our father loved his children. We have missed his love for the past three years and we will miss it even more, especially that we failed to see him before burial,” he said.

“This is very painful not for the family alone, but for his followers who are here.

“It is painful that a person is denied the right to see his family. We do not know where they get their power to act in the manner that they did.”

Wimbo is said to have made the Mugabe prophecy in 1957. He is also alleged to have also predicted that Mnangagwa would prevail in the battle to succeed Mugabe.

Saxon is a prolific writer with passion for the unusual. I believe the bizarre world is always exciting so keeping you up to date with such stories is my pleasure
Previous Man finds snake eating his wife’s lingerie in bedroom (VIDEO)
Next The Most Expensive Coffin In The World Costs N78 Million