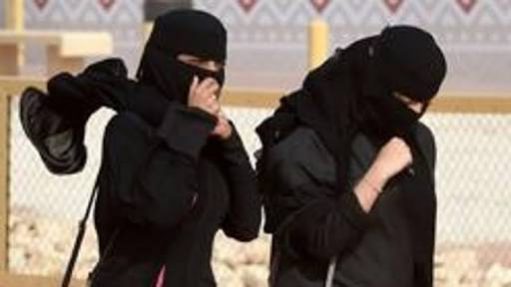 A Saudi woman is currently in trouble after she ran to a stage and hugged a male singer performing in a festival at the western city of Taif on Friday.

The young woman who listened emotionally to a popular Iraqi musician with Saudi citizenship, Majid al-Mohandis, as he performed, could not hold herself again and darted to the stage, quickly hugged the singer before security personnel pulled her off him.

Viral video posted online shows security personnel running after the woman as she ran to the stage but they could not stop her from hugging al-Mohandis.

Part of the restrictions in Saudi Arabia is that women are not allowed to mix in public with men who are not related to them.

The police arrested the woman and referred her to the public prosecution to face charges under the law criminalising harassment, BBC reported on Saturday.
According to Mecca police official spokesman,
“The suspect is held at the Al-Taif Foundation for Women’s Care pending investigation.”

Though in the past one year, Saudi Arabia has started relaxing restrictions on women attending public events in the Kingdom under a series of reforms by Crown Prince Mohammed bin Salman, they are not still expected to go to certain lengths.

The Kingdom earlier allowed women to attend a concert and a football match for the first time and also hosted its first concert by a female singer, Lebanese star Hiba Tawaji, in December. Women were also allowed to drive from last month.

However, it is not yet party time because significant restrictions remain in place and women still have to adhere to strict dress codes.
The unnamed women seen hugging Mohandis was wearing a naqab, a head dress that shows only the eyes.

Saxon is a prolific writer with passion for the unusual. I believe the bizarre world is always exciting so keeping you up to date with such stories is my pleasure
Previous Burglar Calls 911 For Help After He Got Trapped In Escape Room Business
Next Man Survives After Four Bamboo Poles Pierce Into His Chest