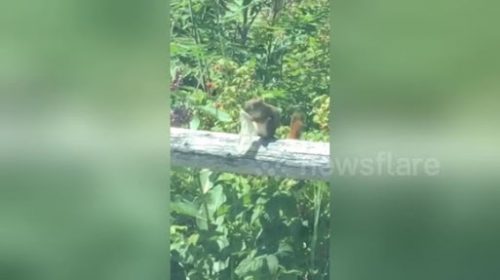 This is really bizarre. After watching this video you will surely keep wondering what this squirrel is doing eating out of a discarded unwrapped condom.

Emily Cole, a nanny in Portland, Maine, took the video of the squirrel while visiting Ferry Beach in nearby Scarborough with the kids on Monday. She posted it on Facebook, and it has since started to go viral.

The squirrel seems to be nibbling on something inside the rubber, but it doesn’t seem to be nuts, berries, twigs or leaves.

“It looks like a balloon,” one of the kids can be heard saying. “Is there stuff inside of it?”

Cole did not explain what was happening or what the squirrel was holding to the kids. She could be heard saying “I don’t know.”

“I really hope one day when they’re older and wiser, their parents will tell them what it actually was they were witnessing here,” she wrote in her post.

She told HuffPost that she showed the video to the kids’ father later that day.

“He chuckled about it but we didn’t say anything in front of the kids,” Cole said with a laugh. “Just let them assume it was a balloon.”

The complete video appears below:

Saxon is a prolific writer with passion for the unusual. I believe the bizarre world is always exciting so keeping you up to date with such stories is my pleasure
Previous Have You Heard Of The Quidditch World Cup?
Next Woman Gets Vicious Abuses And Accusations Of Animal Cruelty Because Of Her Incredibly Life-like Cake Designs