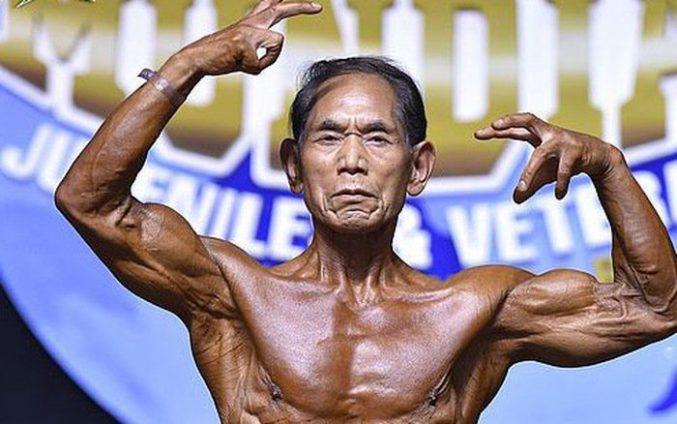 At 81 you would have thought it’s time to watch others lift weight while taking a rest. Not for Japanese bodybuilder Toshisuke Kanazawa whose physic is so stunning you’ll never believe he’s an octogenarian.

Kanazawa was a multiple bodybuilding champion in his youth days. He retired at 34 and started living life the way he wanted, eating, smoking and drinking at will. At a point he looked at his body and felt bad, that this was not the body of a champion. When he was almost 50 years old he got back the motivation he needed and went back to bodybuilding. His body gradually came back to its cute shape. 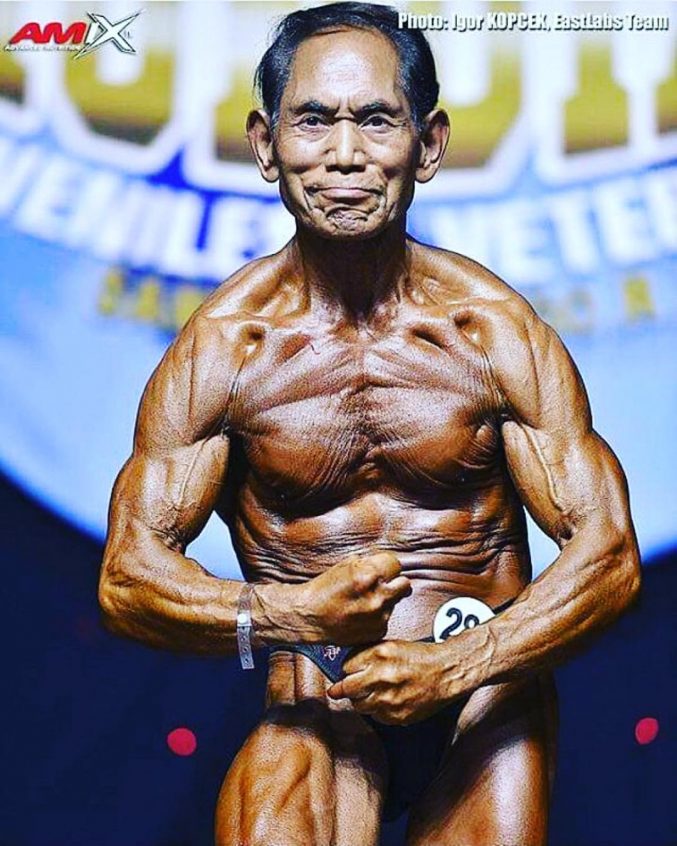 Reports say that about 30 years ago, Kanazawa’s wife started feeling sick frequently, and while thinking of ways to make her feel better, the former bodybuilder remembered that she had never been happier than when he won the national championship. In order to please her, he decided to go back into the gym, drastically change his diet and regain his toned physique.

To stand a chance of losing his flabby gut and becoming “Japan’s best bodybuilder” at such an advance age, Toshisuke had to give up smoking at drinking and adopt a diet based on unpolished rice, “natto” fermented soybeans, miso soup with eggs and protein supplements, but no meat or fish because they were too difficult to digest.

Kanazawa had to start training up to six hours a day to get back his body and fitness,  given his age. The effect of age started giving his body wrinkles so he had to resort to using gold derived from horses to get rid of wrinkly skin. He still uses the oil till today and his skin is getting firm and looking fresh.

Kanazawa still participates in bodybuilding competitions though he has soft-pedalled. In 2016 he came sixth at a bodybuilding competition for people above 65 though he was 80 years old then. He won a special gold medal as the oldest person that participated in the competition, as well as the admiration of the crowd.
He says he has never felt sick since he went back to bodybuilding at 50 and intends to continue until he is 85.
“I want to be a super old man in the bodybuilder community while squarely facing my physical decline,” Kanazawa recently told Asahi. “If I have a goal, I can continue moving forward. I have to work much harder.”

What a wonderful way to grow old.
Via Oddity Central

Saxon is a prolific writer with passion for the unusual. I believe the bizarre world is always exciting so keeping you up to date with such stories is my pleasure
Previous Prophet Arrested For Failing To Bring Dead Man Back To Life (Watch Unbelievable VIDEO)
Next If You Google Image Search ‘Idiot’ You’ll See Donald Trump’s Face As Social Media Group ‘Google Bomb’ His Name