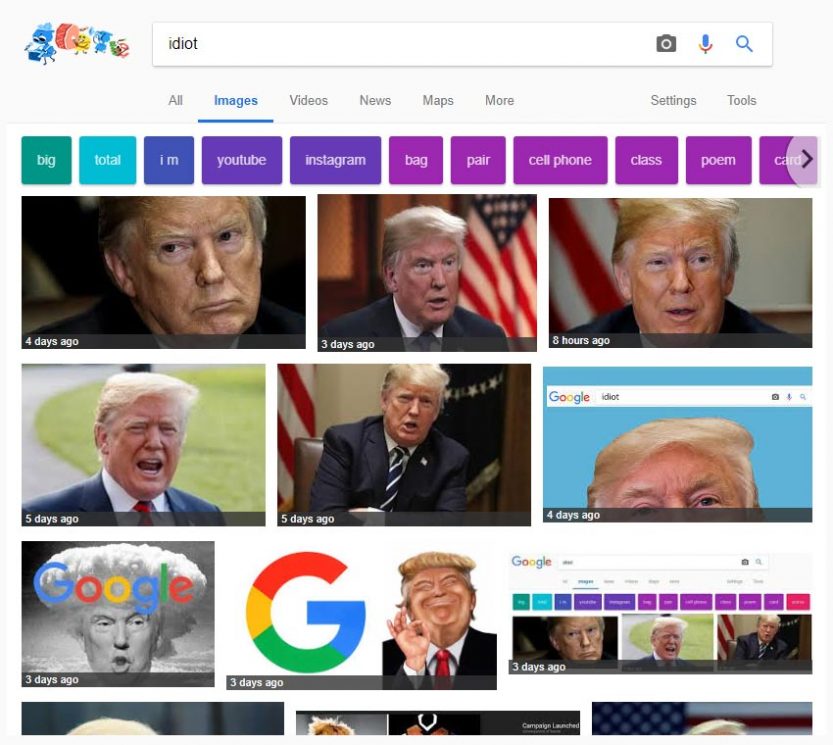 A group of social media activities have google-bombed Donald Trump’s name, linking it to the word ‘Idiot’.

A google bomb is an attempt by a group of people, often disgruntled social media activities, to bias a search result by linking it to a name or elevating a name in google’s search result ranking by linking a particular word or phrase to the website.

This was what a group of people did to US President, Donald Trump. If you enter the word “idiot” into Google’s image search, the first pictures Trump’s. This is not an error. It was deliberately done.

The US president’s elevation in the “idiot” results is, according to the Guardian, the result of a deliberate campaign to manipulate Google’s algorithm.

It all started naturally, as Green Day’s song American Idiot was heavily used during the recent protests at Trump’s U.K. visit. But then, users of the Reddit forum site apparently started upvoting a post that contained Trump’s photo alongside the word “idiot”, in order to tell Google that the post’s page is popular and therefore probably relevant to people searching for “idiot.” Of course, every time an article such as the Guardian’s—or this one—appears, it reinforces the trend.

As Google started showing Trump’s picture when people search for the term idiot, the news broke, further reinforcing the trend.

In a statement, Google responded that it doesn’t support the images, but won’t interfere with search results directly. When the news about Trump and “idiot” being related on its search results, Google didn’t address the issue quickly.

“Search engines are a reflection of the content and information that is available on the internet. A site’s ranking in Google’s search results relies heavily on computer algorithms using thousands of factors to calculate a page’s relevance to a given query,” said Google in 2009. “Sometimes subtleties of language cause anomalies to appear that cannot be predicted.”

Google’s algorithms were created to help the search engine organize and prioritize information. This made Google one of the most powerful companies on the web.

However, just like associating Trump with the word “idiot”, the algorithms had previously gotten to a series of troubles because of it being prone to manipulation based on trends. This is called Google bombing, and it has been around since 1999, or a year after Google was founded.

Some manipulations that had happened over the years include and not limited to:

Searching for “more evil than Satan himself” would show Microsoft’s website; Tony Blair has been associated with the term “liar”; a search for “terrorist sympathizer” returned Bill O’Reilly’s homepage; searching for “dangerous cult” showed the Scientology website; a search for a black developer’s name showed photos of gorillas; the campaign for the neologism “santorum”; searches for “Michelle Obama” returned a picture of her face retouched to have ape-like features, CNN’s logo associated with “fake news”; searches for “rapist” brought images of Bill Clinton; and a search for “Jew” returned anti-Semitic imagery.

Google continues to update its algorithms to make it more useful and powerful. However, the company didn’t necessarily made it culturally sensitive. As a result, the company has faced numerous complaints and needed to do manual reviews to fix things up.

Try it now and see for yourself.

Saxon is a prolific writer with passion for the unusual. I believe the bizarre world is always exciting so keeping you up to date with such stories is my pleasure
Previous See 81-Year-Old Body Builder Proving You’re Never Too Old To Hit The Gym (Video)
Next Shock As 92-Year-Old Woman Kills Son For Trying To Send Her To Nursing Home