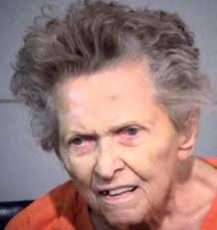 Police in Arizona, USA, have arrested a 92-year-old woman who allegedly shot and killed her son after suspecting he was going to send her to a retirement home.

Anna Mae Blessing did not find it funny after suspected her son was about to move her into a assisted living facility as a result of which she shot her son.

She was charged with 1st degree murder, kidnapping and aggravated assault with a deadly weapon, according to the Maricopa County Sheriff’s Office.

According to a press release from the sheriff’s office, Blessing contemplated for several days before taking action. She put two pistols in the pockets of her robe when she confronted her 72-year-old son and his girlfriend Monday morning in his bedroom. During the confrontation, Blessing shot her son multiple times.

The woman then turned the gun on his girlfriend and the two struggled over the weapon, police said. When the girlfriend managed to get the gun out of Blessing’s hand, the 92-year-old retrieved the other pistol from her pocket. The two fought again before the girlfriend again knocked the pistol out of her hand.

After she was disarmed, Blessing waited in her recliner until police arrived and arrested her, officials said.

This incident is worse than a nightmare seen only in movies.

Saxon is a prolific writer with passion for the unusual. I believe the bizarre world is always exciting so keeping you up to date with such stories is my pleasure
Previous If You Google Image Search ‘Idiot’ You’ll See Donald Trump’s Face As Social Media Group ‘Google Bomb’ His Name
Next Policemen Chasing Suspect Shoot Security Expert