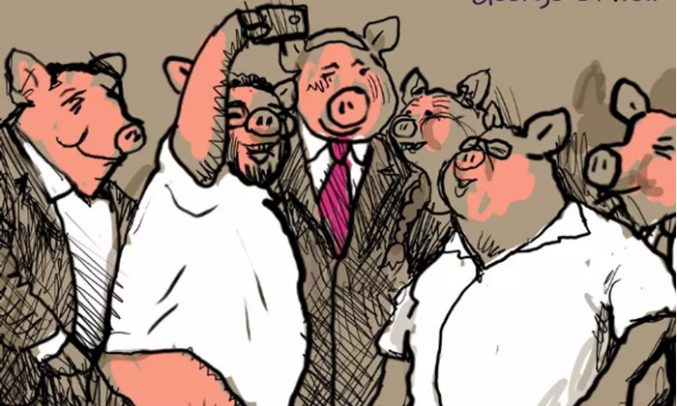 A cartoonist has been sacked by an Israeli news publisher for depicting Prime Minister Benjamin Netanyahu as one of the pigs in George Orwell’s political satire “Animal Farm”.

The dismissal of the cartoonist took place on Thursday, according to the publisher.

The Jerusalem Report news magazine published cartoonist Avi Katz’s take on a selfie taken with Netanyahu by triumphant members of his right-wing Likud party after the vote.

Katz sketched them with pigs’ heads, provoking outrage among some readers in Israel where pigs are considered unclean and eating pork is forbidden under Jewish law.

To make clear the reference to Orwell’s book, Katz captioned his drawing “All animals are equal, but some are more equal than others”.

The line echoes a key phrase from the leader of the revolutionary pigs who in the novel overthrow their human owners, and then start to oppress their fellow farm animals.

The Jerusalem Post newspaper group, which owns the Report, said in a statement that Katz had ruffled feathers with previous cartoons but his latest was particularly offensive.

“It was decided to stop publishing these cartoons, after a number of them in recent months sparked angry reactions,” it wrote.

“A cartoon showing Israeli leaders with pigs’ heads causes harm and incitement, and has no place in any of our publications.”

Press freedom advocates noted that the cartoon was approved for publication by Jerusalem Report editors.

It was still on the magazine’s website on Thursday.

The law adopted last week defines Israel as the nation-state of the Jewish people and says they have a “unique” right to self-determination there.

Saxon is a prolific writer with passion for the unusual. I believe the bizarre world is always exciting so keeping you up to date with such stories is my pleasure
Previous Video Of Shocking Moments Leopard Entered Doorless House Of Farmer, Has Close Shave With His Son
Next UK Doctors Can Now Prescribe Indian Hemp —Official