Greece Struck With Flash Floods Days After Prayers For Rain 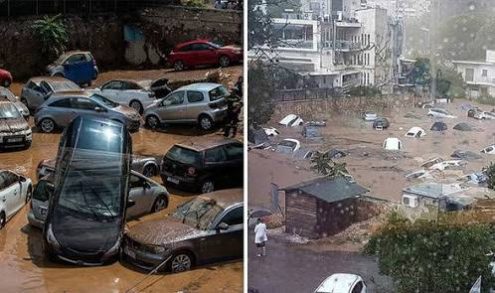 Greece has just survived the worst wild fire in that country’s history, taking about 82 lives with it. As the wild fire raged with venomous destruction, people prayed for rains to come and save the situation.

What they got in form of answered prayers was a devastating flash flood which left huge destruction, although no life was lost.

The heavy downpour that came after the wild fire caused flash floods in Athens on Thursday July 26.

Dozens of cars were damaged and motorists were left stranded, but no one was hurt.

Following this incident, some Christians have taken to social media to describe it as a message from God to Greece.

“The power of prayer, they asked for forgiveness and they got it.”

Another added: “The end is near and this is another Biblical message.”

And a third claimed: “God is telling Greece the day of judgement is coming.”

Saxon is a prolific writer with passion for the unusual. I believe the bizarre world is always exciting so keeping you up to date with such stories is my pleasure
Previous Father Christmases Hold Annual Congress
Next Crime Suspect Hides In Dryer To Evade Police