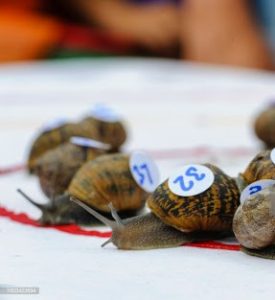 Over 150 snails took part in the event and the prize was a silver tankard stuffed with lettuce leaves. 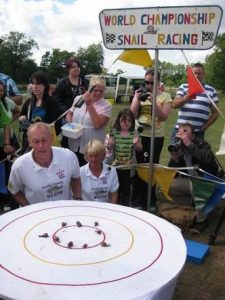 There was a hilarious beginning as the race starter shouted “Ready, steady, slow!” Instead of moving, the snails were stuck at a the start line even as the crowd cheered on. Probably the ‘athletes’ or should I say ‘snailthletes’did not hear the official.

The championship is a special occasion with  different racing rules though.
The snails are placed on a special damp cloth marked with three concentric circles and the creatures race 13 inches (33 cm) to the outer ring. 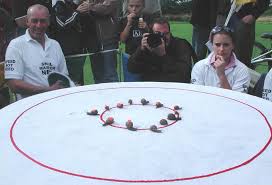 “We have got training slopes. We look at diet, we are drug compliant as well. It is the whole thing when you look at elite sports.”

The competition has been held since the 1960s with each race lasting several minutes. Competitors are able to select a snail from the organizers’ stash or bring their own.

Jo Waterfield from the nearby village of Grimston found the eventual winner among her plants.

“I pulled him out this morning and told him if he didn’t win I would squash him,” Waterfield told Reuters.