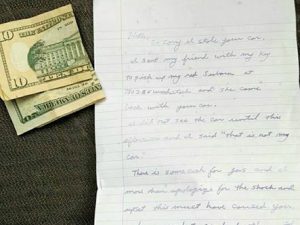 A woman in Arkansas, USA, has been given back money by the police which was stolen from her wallet by a thief, and guess what? The thief returned the money with a written apology.

The woman, Susan McNabb said she left her wallet, and the $160 cash it contained, behind at the Walmart store in Clinton, and when she returned a short time later, the wallet was still there but the cash was gone.

“Then I went down to the city police and reported it,” McNabb told KARK-TV.

McNabb said she was surprised when police called her Wednesday morning to say someone had come by the station and dropped off an envelope containing $160 cash and a note.

“To the lady that left her wallet at Walmart…please forgive me as I always strive to have integrity, and that day I failed miserably,” the note read.

Police said a woman brought in the envelope but left without giving her name.

McNabb said the woman’s change-of-heart has inspired her to spend the money on helping others.

A Pennsylvania police department detailed a similar tale of remorse earlier in July. The Minersville Police Department received a letter in the mail from a person who said they received a parking ticket 44 years earlier. The apology letter included a $5 payment for the ticket.

Vanko is a cheerful writer whose enthusiasm for unusual stories is inspiring.
Previous Shocking Video Of Moments Woman Reaching Into Bag Of Rice Finds Deadly Cobra Inside
Next Couple Freaks Out As ‘Zombie’ Rat Climbs Out Of Their Bathroom Sink