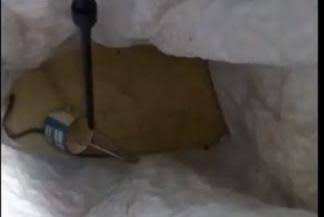 A woman in an Indian village narrowly escaped a deadly attack when she attempted to take from a bag of rice in her home only to find a venomous cobra inside.

It was a nightmarish experience for 23-year-old Sagarika Sundaray, who would have ended up dead or in serious condition in a hospital just for attempting to cook rice for her family.

Sundaray said she put her hand in the bag at her home in Bhubaneswar, Odisha, and quickly pulled it back out when she felt something cold moving inside the bag reports UPI.

The moving object turned out to be a baby cobra.

Sundaray contacted the local Snake Helpline and trapper Subhendu Mallik arrived to find the snake hiding in a cup placed in the bag for scooping the rice.

Mallik released the cobra outside of town.

The trapper said the encounter could have been deadly.

“Baby cobras have fully grown venom apparatus and can kill humans with their bite. She was lucky to escape,” he said.

This is a terrible experience which could create a lasting trauma on the victim. Just hoping the woman will not always remember this whenever she sees a cup of rice.

Saxon is a prolific writer with passion for the unusual. I believe the bizarre world is always exciting so keeping you up to date with such stories is my pleasure
Previous Outrage As Visitors Discover Zoo Fooled Them By Painting Donkeys To Look Like Zebras
Next Remorseful Thief Returns Stolen Cash With Apology Note