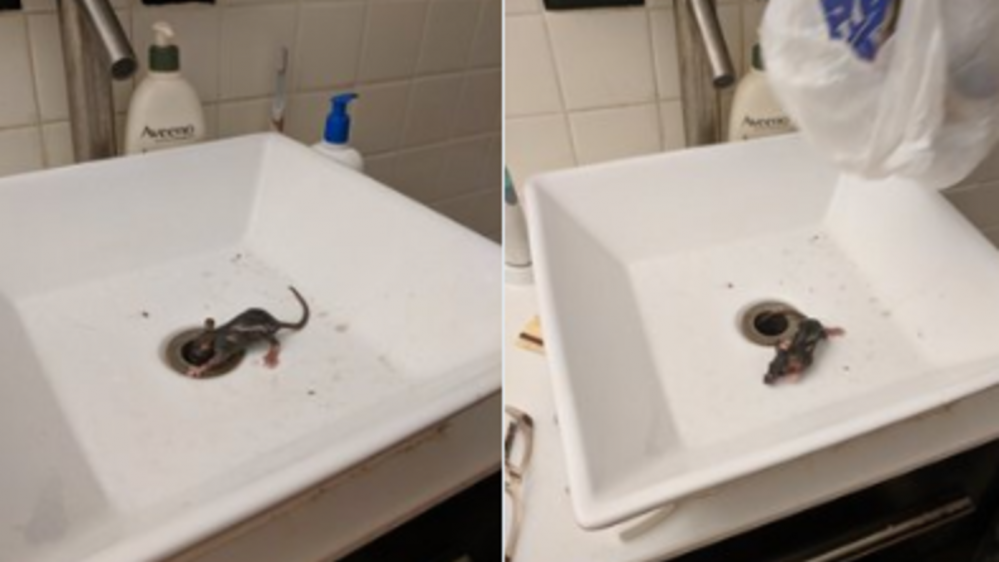 A couple in Brooklyn, New York encountered a disgusting situation which was a first in their apartment building. And what was that? A baby rat suddenly wiggled out of their bathroom sink, slowly and gently in a manner only akin to a horror movie.

“It looked like a zombie coming out of the grave, ” Bary Finkel said, as she explained how the rat crawled out and scurried around the sink before climbing back down the drain.

The incident which happened on Friday night (July 13) was the first as the couple said they had never seen a rodent in their apartment, neither had anyone living in the entire building seen any in their apartments.

According to Finkel, the bathroom sink had no stopper because of a slow drain.
She said her boyfriend was using the restroom when he noticed strange noise in the sink.

When he looked over at the sink he let out a yelp. Finkel heard it and went over to the bathroom thinking that he had somehow hurt himself. On sighting the rat, she said she let out her own horrified scream when she saw the critter for herself.

“I looked over and saw this small creature just emerging from the drain,” she said.

She added, “It was just so insane I couldn’t not laugh.”

“After a couple minutes, (the rat) was making sounds and was clearly also freaked out,” she said. “I said ‘we should probably take a couple of pictures, because this is insane.’”

She said that when she lifted the bag to get pictures, the rat escaped the only way it could: it climbed back down the drain.

“I’m glad we didn’t have to figure out what to do with it, but I did not love the idea of it being in the pipes,” she said.

Finkel said she and her boyfriend couldn’t get themselves to use the bathroom for a few hours after the rodent experience. But she added that they don’t have any plans to change their routine except replacing their sink stopper which could possibly prevent such incident from reoccurring.

Saxon is a prolific writer with passion for the unusual. I believe the bizarre world is always exciting so keeping you up to date with such stories is my pleasure
Previous Remorseful Thief Returns Stolen Cash With Apology Note
Next Iraqi Airways Suspends Pilots Who Fought In-flight Over Food